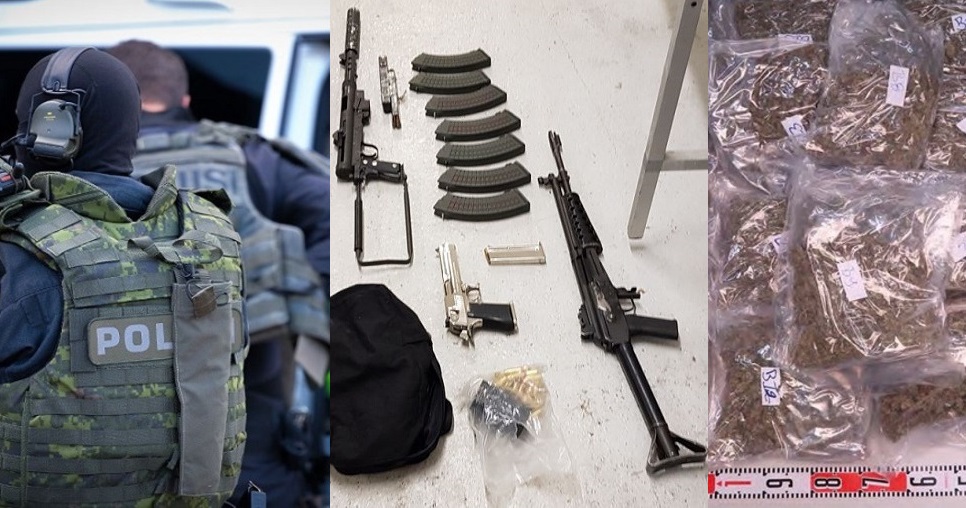 A combine photo of the drive and the recovered firearms and drugs. Photo: Police and Customs.

Members of the law enforcing agencies in a special drive called Operation Greenlight arrested about 100 people and recovered firearms, ammunition and drugs from different parts in Finland, said the police in a press release on Tuesday.

The Finnish Police participated in the major global law enforcement operation led by the Federal Bureau of Investigation (FBI).

The Operation Greenlight contributed to the fight against organised drug trafficking, in particular, and resulted in large drug seizures.

The leadership of the international covert operation was assumed by the FBI, the US Drug Enforcement Administration (DEA), and the Dutch and Swedish Police. The other partners comprised the European Union Agency for Law Enforcement Cooperation (Europol) and law enforcement authorities from 16 countries, including Finland.

During the operation, the FBI was able to monitor encrypted communications between criminals in different countries. It disseminated information about the communications to law enforcement authorities in the partner countries.

“On the basis of the information the FBI shared with the Finnish authorities, we were able to direct our actions to detect crime and open several criminal investigations. In Finland, actions have been carried out in close cooperation between the local police departments, the National Bureau of Investigation (NBI) and Customs. The criminal investigations are connected with organised crime, drug trafficking in particular,” said Detective Chief Inspector Kimmo Sainio of the NBI, the agency led the operation in Finland.

During the criminal investigations connected with the operation, the Finnish authorities have seized more than 500 kilos of drugs, several dozen weapons and hundreds of thousands of euros in cash, and apprehended almost a hundred people.

Most of the criminal investigations are still underway, but a joint investigation between the Eastern and Western Uusimaa and Helsinki Police Departments, NBI and Customs, connected with a large marijuana seizure, was recently referred to the prosecutor for consideration of charges. During this investigation the authorities seized, among others, automatic guns and more than 145 kilos of marijuana.

During the drive Finnish Customs conducted extensive search in storage premises in Tampere which were used for the production of firearm parts with 3D printers.

Two active firearms, a large number of firearm parts and a lot of ammunition were seized from the premises.

According to the FBI, it created the platform to fill the communication void after the takedown of the other platforms, and it subsequently shared communications sent on the platform with law enforcement authorities for their actions against organised crime and drug trafficking.

The encrypted communication platform was active from October 2019 to June 2021. During this period, the platform had around 12,000 users in more than a hundred countries, and the FBI collected and processed up to 27 million messages sent on the platform.

“The FBI spontaneously shared with partner countries the data it considered relevant to these countries on the basis of the language or country of residence of the individuals. According to the FBI, the platform was only used by criminals,” said Sainio.