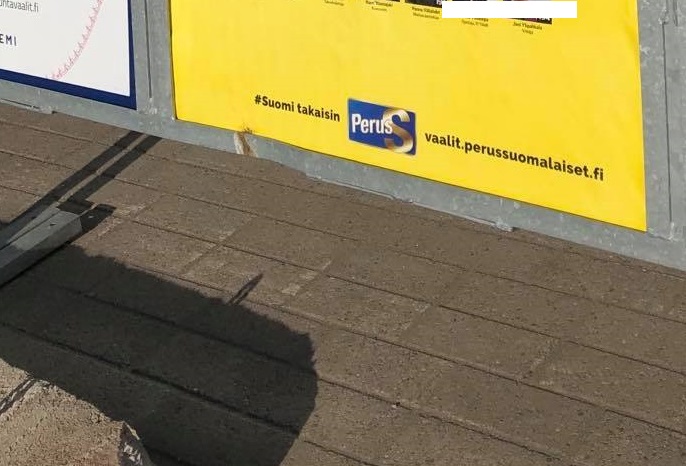 The Transport Department of the City of Helsinki and advertising company JCDecaux have decided to remove the election advertisements of the main opposition Perussuomalaiset (Finns Party) containing texts and pictures against the immigrants, reported national broadcaster Yle, quoting the respective authorities.

The advertisements posted as a campaign for the municipality elections said that immigrants get advantageous treatment in the allotment of rental housing in Helsinki.

The advertisements contained a picture of an apartment building's residents list, as would appear in the stairwell of a building, which reads "Skipped the queue" instead of most of the names, said the Yle report, adding that the text under the photo claimed that that immigration policy affects access to housing for ordinary, employed urban dwellers.

The issue created debate on social media during the weekend where the contents were considered to be racist and anti-immigrant.

Terming the contents as misleading, Klaus Kuhanen, CEO of JCDecaux told news agency STT that the agreement between the company and the city prohibits advertising that arouse public disapproval and does not comply with ethical rules.

The process to remove the advertisements from the streets of Helsinki had already started, said Yle, quoting the STT report as Kuhanen saying.

Perussuomalaiset Helsinki chapter chair Johannes Nieminen, however, termed the decision of removal of the poster as exceptional and claimed that the decision was a restriction on political freedom of speech.

Mari Randell, from the city's urban environment department told Yle that that access to city housing in Helsinki was not based on queues so none can lose place in line to another.

She said that the decisions on the housing applications are made based on the vacancies and the urgency of the need.

Ethnicity or Finnish nationality is not a factor to take the decision at any stage of the process, said the City official.

The municipal elections are scheduled to be held on 13 June.

The advance voting in the municipal elections began on 26 May and will be continued two weeks till 8 June.