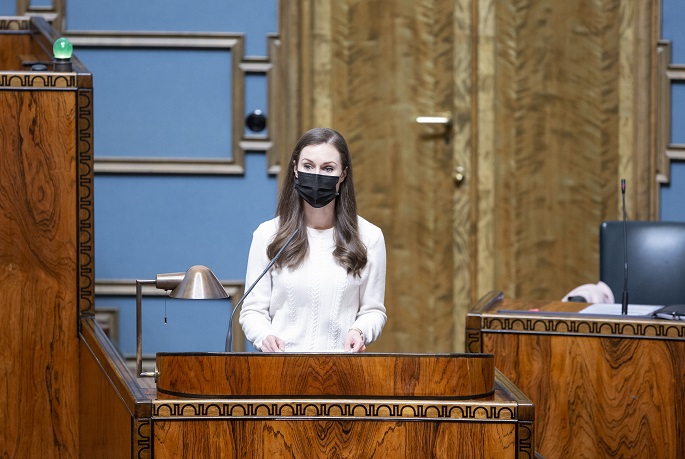 Prime Minister Sanna Marin on Wednesday expressed confidence in the acceptance of the European Union's coronavirus recovery fund in the country though lawmakers ruled Tuesday that a simple majority vote would not be enough, reported Xinhua.

Finland was originally scheduled to present its plan of the 750-billion-euro recovery fund on Friday to the EU but announced a delay. The Nordic country has had a tough ride in approving the recovery fund.

On Tuesday, the Parliament's Constitutional Law Committee concluded that the EU's recovery fund must be backed by a two-thirds majority in the parliament rather than a simple majority.

The decision caused concern about the fate of the recovery fund because the parties in the Finnish coalition government would secure a simple majority, but the two-thirds majority would require backings from the oppositions, which have a strong aversion to the fund.

All EU member states have to ratify their own resources decision at the national level to enable the 27-country block to take out a loan to set up the facility.

If Finland were to see the defeat of the recovery package, it would cause not only major problems to the EU, but a catastrophe to the EU policy of Finland, said senior economist Sixten Korkman.

However, Marin's remarks on Wednesday came as some kind of relief to the deadlock. Besides, the National Coalition, one of Finland's two main opposition parties, announced it would vote blank in the decisive vote, reducing the number of votes required for a two-thirds majority. No date has yet been set for the vote.

The constitutional committee ruled that the "own funds" of the EU and the joint loans mean a transfer of power from Finland to the EU and thus require the two-thirds majority.

Domestic criticism was heard right after Union leaders finally clinched the recovery fund after the marathon summit in July last year. The fund, proposed by the European Commission to repair the economic damage caused by the COVID-19 pandemic, will provide a grant of 312.5 billion euros and up to 360 billion euros in loans.

According to local media reports, Finland is presently estimated to receive no more than 3 billion euros from the recovery package, whereas its contribution toward the facility will add up to 6.6 billion euros by 2058.

A survey conducted by the Finnish language newspaper group Uutissuomalainen last summer said that a majority of Finns opposed the recovery fund. Some argued that the EU-wide grants and loans could increase Finland's debt burden.

Marin defended the recovery fund and dismissed the discussion about funding for countries that had allegedly mismanaged their economies. "That is not the issue now. Europe is seeking recovery jointly," she said. "Finland is an export-driven economy, and it is crucial for us that the whole of Europe will recover."

Last week, the European Commission said that it intended to approve the EU member states' recovery and resilience plans by summer and then begin to disburse funds accordingly.

In mid-April, the Ministry of Finance said Finland would delay presenting its recovery and resilience plan to the EU until May 15. It was originally scheduled to present its plan on April 30.

"Discussions with the European Commission have progressed well but have yet been completed. There is a lot of technical work, so more time is required to complete the final recovery and resilience plan," said Minister of Finance Matti Vanhanen.

The government published a preliminary plan for using its share in March.

According to the plan, Finland would use half of the EU recovery fund for climate projects and a fourth for digitalization. Meanwhile, part of the funding would also be used for speedier access to healthcare and employment.

Despite the differences, the implementation of the package is important from Finland's point of view, said Timo Ritakallio, CEO of OP Bank Group, one of the largest financial companies in Finland.

"I think the most important thing about the recovery package would be to get that money moving as soon as possible. And target them at the right targets, both at the European level and in Finland," he told national radio Yle.

He noted that Finland will benefit from the package, especially through the economic recovery of its key export destination countries.