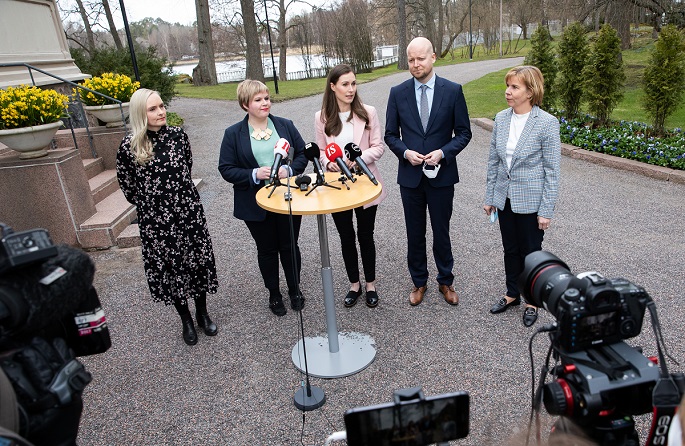 Leaders of the five-party alliance government talked to the journalists at the outside Prime Minister´s official residence, Kesäranta on Wednesday. Photo: Finnish government by Lauri Heikkinen.

The five-party alliance government on Wednesday finally reached to an agreement on the budget framework for the next two years on the eighth day of the marathon negotiations started on 21 April.

The agreement also helped the government to avoid the possible collapse created following the disagreement of one of the components with the four other left leaning parties.

"We have reached to a deal with all the heads of the ruling allies on the key issues,” said Prime Minister Sanna Marin,” after the talks in the afternoon.

She said that all the ruling parties succeed to narrow down the gap as every party has compromised to reach to a deal.

The stalemate situation in the government created over the budget framework as the ruling allies failed to reach to an agreement till Tuesday evening even after seven days of parley.

The situation also threw the fate of the government hangs in the balance.

The budget negotiations among the ruling parties started on 21 April and were supposed to be over by 22 April.

Although most of the parties agreed on the framework, the rigidity of one of the components, the Suomen Keskusta (the Centre Party of Finland) brought things to such a dire state, triggering uncertainty about the government’s fate.

The most contentious of the issues were employment and the economy, as well as the use of peat for energy.

The five-party coalition government was formed with the Sosialidemokraattinen Puolue (Social Democratic Party of Finland-SDP), the Suomen Keskusta (the Centre Party of Finland), the Vihreäliitto (the Green League), the Vasemmistoliitto (the Left Alliance), and the Suomenruotsalainenkansanpuolue (the Swedish People’s Party of Finlan–RKP), after the April 2019 parliamentary polls led by the then SDP leader Antti Rinne as the prime minister.

Antti Rinne resigned from that office on 3 December 2019 as the Keskusta withdrew its support for him, following a mammoth strike of postal employees across the country.

Later, Sanna Marin of the SDP took over as the prime minister and the leaders of the five-party alliance decided to continue with the programme originally outlined by Rinne.