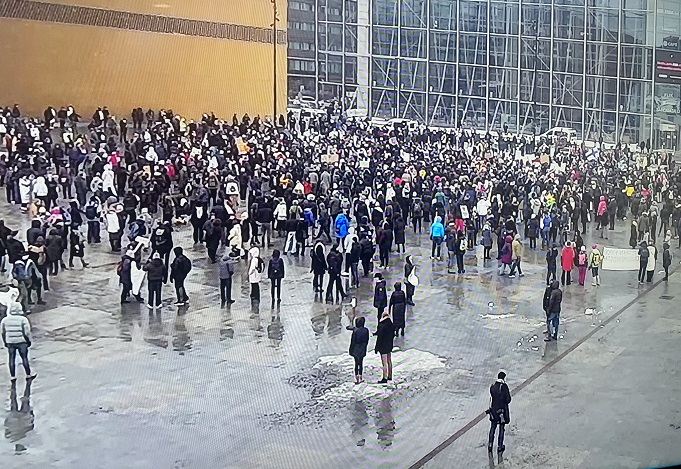 File picture of a demonstration against coronavirus measures in Helsinki in March. Photo: Helsinki Police.

Several hundreds of people on Saturday gathered at the Market Square and the Narinkkatori Square in Helsinki, protesting against the restrictive measures taken in the wake of the coronavirus outbreak.

The law-enforcers arrested 20 demonstrators at the spot, as they did not pay heed to the police order to disperse.

The police said about 300 people gathered in the area at about 12:00 noon, violating the restriction on gathering of more than six people against the backdrop of the coronavirus situation.

In addition to the detainees, the police also fined 10 car drivers for disruptive driving and honking their horns as part of a procession in the area.

Earlier, the police warned that they would disband the procession, if the participants try to form a large gathering instead of a number of small groups.

Although the demonstrators announced through social media to continue with the protest till 4:00 pm, it had to end at 2:00 pm due to police intervention.

The demonstration was a continuation of the protest that took place on 20 March in Helsinki, where the police suspected 46 people of a rally of violating the rule of restrictive measures against coronavirus.

Meanwhile, the police also monitored another, separate two-person demonstration in a park in front of the Parliament Annex. They informed the police in this regard earlier.

On 20 March, about 300 people gathered at the Citizens’ Square in Helsinki, protesting against the restrictive measures taken in the wake of the coronavirus outbreak.

The number of participants of the procession increased to about 400 by the time it reached the Citizens’ Square via the OODI Library.

The police said the demonstrators did not follow the instructions of maintaining safe distance correctly. They violated the rules that limited gatherings in the Helsinki-Uusimaa region to six people.

About a dozen of the demonstrations were held at the Citizens’ Square and ended peacefully without any untoward incident at that time.