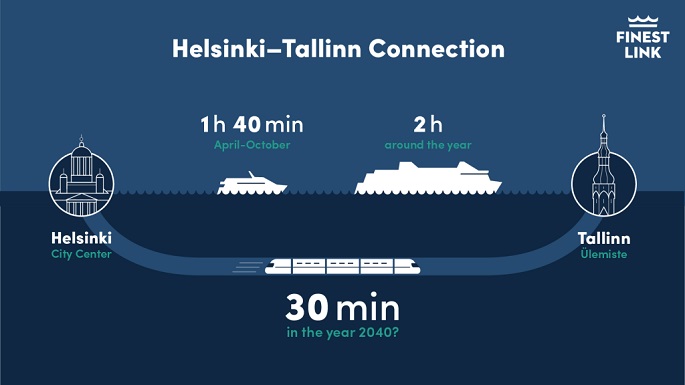 Finnish company Finest Bay Area Development Oy (FEBAY) announced at the end of the week the signing of a memorandum of understanding for construction of the Helsinki-Tallinn tunnel.

The parties have agreed to negotiate final agreements on the Tallinn tunnel project design and construction. Each party has their strengths in different fields, and these will be considered in the project scoping. These partnerships have been selected based on the experience and expertise of these organizations mega sized infrastructure projects and tunnel and train technology.

”We are very excited to get these best in class tunnel and train skilled design and construction companies to join our project. The trust between the parties has formed through discussions and actions. The partner companies are the largest in the world in their own fields of expertise. These new partners are needed in addition to the best in class local Finnish, Estonian and other European design and construction for example there is very limited resources in Finland and Estonia in tunnel boring and highspeed train technologies.” stated Peter Vesterbacka FEBAY co-founder.

The project plan now includes a revised schedule for the Espoo Lentorata. Traffic on this part of the tunnel track may start even sooner than the whole tunnel traffic that is planned to start 24.12.2024. At the same time the parties have agreed to construct the below ground commuter parking for the tunnel as a parking capacity of more than 10000 spaces. This will enable an optimized station area from walking and cycling perspective.

FEBAY tunnel project intention is to construct a subsea train tunnel between Finland and Estonia that will reduce the travel time between the countries significantly. The train tunnel will form a common metropolitan area of the capital city regions of Finland and Estonia. The new metropolitan area will be a center of gravity between Asia and Europe when through the tunnel it is possible to travel with train from Helsinki-Vantaa Airport to Tallinn and then onwards to Central Europe. In Finland the initiative will strengthen the role of Vantaa as a logistical hub and will enable The cities of Uusimaa region to connect better to the national transportation network.

The Tallinn tunnel project consortium core has been formed by ÅF Pöyry, AINS and FIRA. Planning and design and the environmental impact assessment will continue with these partner organizations as planned. ÅF Pöyry and AINS have already connected and made themselves familiar with the forth coming Chinese partner organizations during the winter and spring of 2019 by visiting each other in Beijing and hosting delegations in Finland. CRIG president Chen also visited with Estonian prime minister Ratas in January to present and share information about the companies capabilities in the infrastructure space.

The project will have a significant economical impact on the Finnish and Estonian economies. The construction part of the whole 15B€ budget is roughly 12,5B€. FEBAY chief economist Atso Andersen has calculated that in Finland the annual impact could be as much as 20 000 man years. In Estonia the need is in the range of 6 000 man years during the active project years.