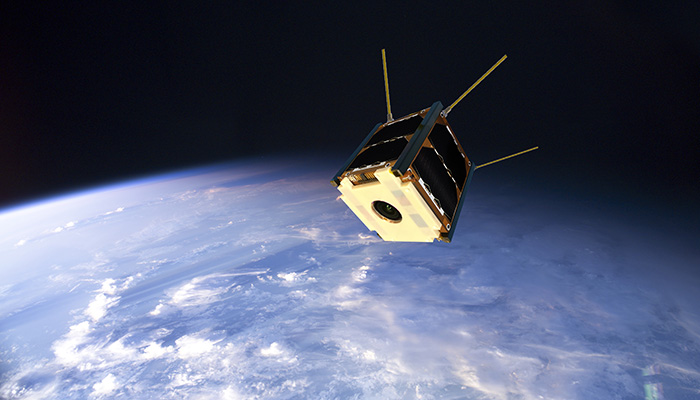 Artist’s impression of the Suomi 100 satellite orbiting the Earth. The experimental 3D printed plastic part is clearly visible in the forward section of the satellite. The antennae for the radio research device are contained inside it. The camera lens can be seen in the centre of the plastic part. Photo: Aalto University.

The launch of Suomi 100 satellite has been deferred from the originally planned date in end-2017 to the beginning of 2018, said the Aalto University in a press release.

The journey of Suomi 100 into space is being delayed by not only the legislation process of the new Space Act but also by an ongoing investigation into a glitch that took place in the August 2017 flight of the Indian PSLV rocket that will be used for the satellite’s launch.

“Satellite launch schedules always depend on many different factors. The original flight planned for the Suomi 100 satellite has been moved to March next year,” explained Professor Esa Kallio of Aalto University who is the director responsible for the satellite project.

The satellite was to have had a place on an earlier flight that is now scheduled for December, said the release. However, further investigations into the failure of the PSLV rocket as well as Finnish permit issues will delay the launching of Suomi 100 to next year.

The satellite will be delivered and sent into space under the provisions of the proposed Space Act.

The government at the end of October submitted Finland’s first Space Act for legislation with a view to accelerate the launching of the Aalto-1 and Aalto-2 satellites. The act, which is progressive even by international standards, takes into account Finland’s growing space activities and covers nanosatellites such as Aalto-1 and Aalto-2 as well as the Suomi 100 satellite.

The act has not yet been passed. Although Suomi 100 will be delivered to a Netherlands-based launching company, it will eventually end up outside Europe, from where it will leave the earth. According to the proposed act, this means that before it is handed over for launching, the satellite must have a separate export permit which was not required for previous satellites. The Suomi 100 satellite now docked at the Aalto University, ready to go, must also be subject to a detailed risk analysis.

In space, the Suomi 100 satellite will examine the space weather using a special radio measuring device and will also use its camera to take pictures of the Earth, inner space phenomena and Finland. The Finnish Meteorological Institute, which is collaborating with the Alto University in implementation of the satellite project, is taking care of the satellite’s computer software. The FMI has considerable experience in manufacture of space research devices. The satellite will also test a 3D printed plastic structure developed by the university in space for the first time.