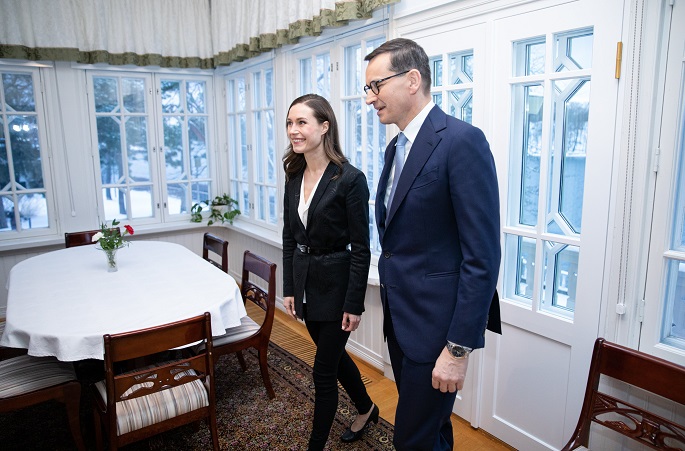 Prime Minister Sanna Marin and her Polish counterpart Mateusz Morawiecki on Sunday agreed that Russia must pay for the damage it has caused in Ukraine.

It emerged from the discussions between the Premiers in Helsinki that means should now be sought to use Russian assets frozen in the EU to cover damages and to rebuild Ukraine, said a government press release.

They discussed Russia's war of aggression, support for Ukraine, ways to hold Russia more accountable for the war and its consequences, Finland’s future membership of NATO, and topical EU matters, such as the economy.

The Prime Ministers noted that Finland and Poland enjoy good bilateral relations. As an EU and NATO member country in the Baltic Sea Region, Poland is an important partner for Finland, both politically and economically.

Marin again extended her condolences for the lives lost in the missile explosion in Poland and thanked the Polish leadership for their calm and determined approach to investigating the incident.

“Russia bears the ultimate responsibility for the incident, which is a result of the invasion Russia has launched,” said Marin.

Marin thanked Poland for its role in providing support to Ukraine. Poland strongly supports Ukraine and has, among other things, accepted a significant proportion of Ukrainian refugees arriving in the EU.

Finland will also continue to use a range of methods to deliver support to Ukraine as long as it is needed, Marin said during the discussion.

The Prime Ministers noted that Finland’s future membership of NATO will strengthen the security of not only the Baltic Sea Region, but also Europe as a whole.

Marin thanked Poland for the fast ratification of Finland’s NATO membership. Poland ratified Finland’s membership at the end of July.

This was Mateusz Morawiecki’s first visit to Finland as prime minister.