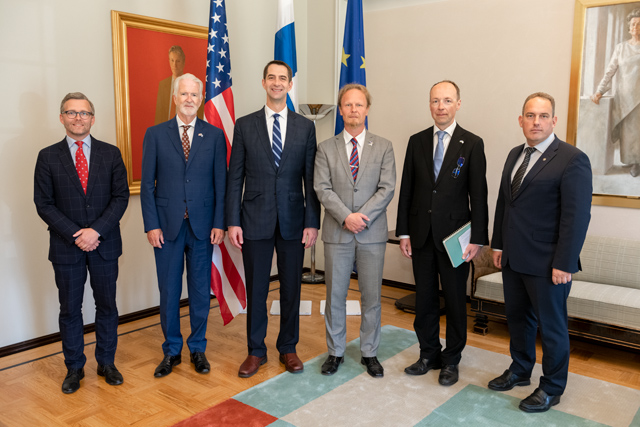 Chairperson of the Foreign Affairs Committee Jussi Halla-aho, Vice-Chair Erkki Tuomioja and representatives of the parliamentary groups also participated in the lunch meeting.

The topics of the meeting included, for example, Finland's NATO process, relations with Russia and the security of the Baltic and Nordic countries.

Eerola, who hosted the event, thanked Senator Tom Cotton for his support in the US Senate with Finland's NATO membership application.

"We had very good and extensive discussions with Senator Tom Cotton about the current political and economic situation in the world. I especially respect his knowledge of Finnish history and the Winter War sniper Simo Häyhä, whom he even mentioned in his speech in the Senate. We have a big and reliable partner on the other side of the Atlantic ", stated Eerola.

“Closing the circle with Senator Tom Cotton. We first discussed Finland's NATO membership in Washington in March, and continued now after US ratification,” Niinistö wrote in a twitter post on Thursday.

The senator's visit to Finland is hosted by US Ambassador to Finland Douglas Hickey.