Atrocities committed in Borodianka, Bucha must not go unpunished 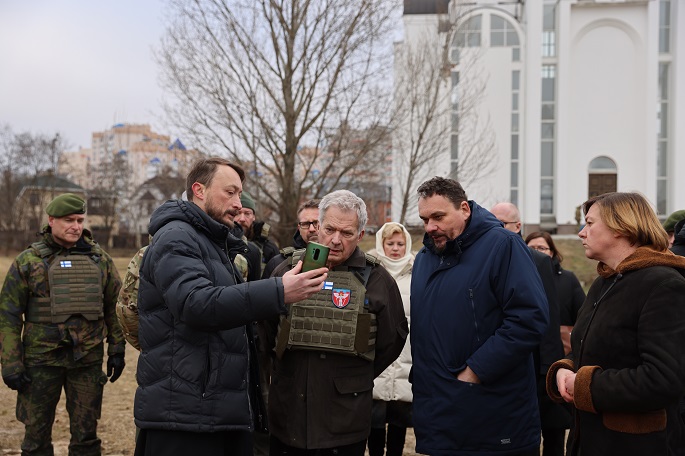 President Sauli Niinistö on Tuesday said that the atrocities committed at Borodianka and Bucha in Ukraine must not go unpunished.

“Visited Borodianka and Bucha. The atrocities committed here must not go unpunished,” Niinistö wrote in a twitter post on Tuesday afternoon during his visit to Ukraine.

“I remain deeply impressed by the courage and determination of the Ukrainian people, soldiers and civilians alike. It will be remembered for generations to come,” said the President in the twitter post.

Niinistö visited Borodianka and Bucha, where local authorities showed him the ravages of war and told him about the suffering caused to civilians by the Russian invasion, according to a press release issued by the President Office.

The president during his visit to Ukraine met with his Ukrainian counterpart Volodymyr Zelenskyy in Kyiv and reiterated Finland’s strong and unwavering support for Ukraine for as long as needed.

“Today (Tuesday) in Kyiv, I reiterated Finland’s strong and unwavering support for Ukraine for as long as needed. We are with you, President ZelenskyyUA,” Niinistö wrote in another twitter post after meeting with Zelenskyy.

The Presidents discussed the current situation concerning the war of aggression that Russia started 11 months ago, Finland’s political and material support to Ukraine and Ukraine’s efforts to bring about a just peace.

In addition to the meeting with Zelenskyy and visiting Borodianka and Bucha, Niinistö placed a wreath at the Wall of Remembrance for those fallen in the war in Kyiv.

He also held a discussion with local university students during his visit.

“Together for security, together for a just peace.” An inspiring and insightful discussion with the students of the Taras Shevchenko National University of Kyiv, Niinistö wrote in another twitter post.