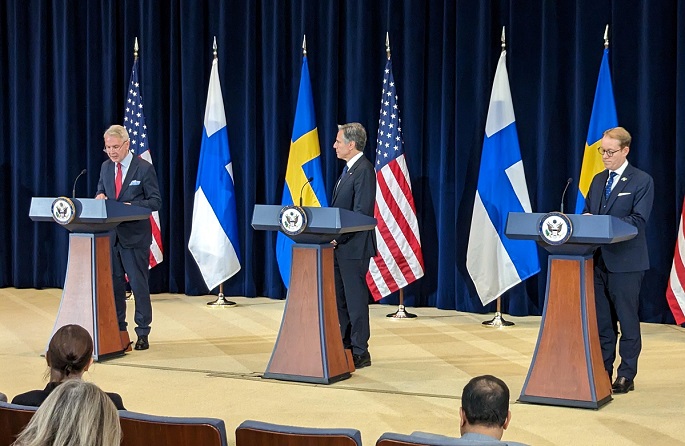 Foreign Ministers Pekka Haavisto on Thursday said that the clear date and clear plan of the Turkish parliament to deal with the Finland, Sweden´s NATO membership ratification is still missing and hoped that the decision from Turkey should come soon.

“Of course, what we are still missing is the clear date and clear plan of the Turkish parliament to deal with this issue. And we know that Turkey is going to the elections. Of course, our hope is that this decision should come from Turkey rather sooner than later,” he said replying to a query at a joint press conference with US Secretary of State Antony J. Blinken and Swedish Foreign Minister Tobias Billström in Washington.

Haavisto also said that the security concerns of all Allies are taken seriously. Finland is a security provider whose membership will further strengthen the Alliance as a whole.

“And we already established this tripartite working group in Madrid NATO Summit. This working group has been meeting on the expert level, one time in Stockholm, one time in Helsinki. Those meetings have been very good and issues have been clarified regarding Turkish concern on the terrorism. PKK as an organization is forbidden organization in the whole Europe, including Finland and Sweden, and so forth. So those issues that are mentioned in the memorandum, tripartite memorandum, are very much fulfilled,” Haavisto said.

He also informed about an announcement in Bucharest during the Bucharest meeting from Hungary that they are ready to ratify in the beginning of February.

He also hoped that this will be the timetable that both of Finland and Sweden could come as members, full members of NATO.

US Secretary of State Blinken said that they were working toward the ratifications of the NATO accession protocols of Finland and Sweden by Turkey and Hungary and expressed his optimism that they will soon be able to call both countries formally their allies.

Replying to a query regarding help convincing Turkey, Blinken, however, said that this is not a bilateral issue between the United States and Turkey.

“I’m confident that NATO will formally welcome Finland and Sweden as members soon,” Blinken said at the press conference, according to the US State Department.

While asked what concrete steps have the Secretary and US government taken to try and help convince Turkey to accept Sweden and Finland without delay, he said, this is a matter of having a process for the entire Alliance for new members to come in.

“Again, this is not a bilateral issue between the United States and Turkey and it’s not going to turn into one. This is a matter of having a process for the entire Alliance for new members to come in. As part of that process, one of the members has raised concerns that are being addressed directly by that country and the prospective new members, said the US secretary replying to the query.

“Again, they have a memorandum of understanding. Very tangible steps have been taken to implement it, and we will let them continue that process with Turkey,“ he added.

He pointed out that all 30 Allies signed the accession protocols; 28 of the 30, of course, have ratified them, and they were working toward the additional ratifications – Turkey and Hungary.

“And I am convinced, based on everything I know, that we will soon be able to call both countries formally our allies,” he added.

Turkey has raised important security concerns in this process, and the process is being used effectively and productively to address those concerns, he said.

“And I won’t speak for either of my colleagues on that, except to say, as we’ve observed it, what both countries have done in engaging with Turkey and with NATO itself has been to address those concerns in tangible ways. And we’ve seen these countries take tangible steps to, again, address the concerns that Turkey has raised,” said the US Secretary.

Swedish Foreign Minister Tobias Billström said that the discussions have been immensely valuable in both the bilateral and trilateral formats.

“Naturally, we focused on our NATO accession process, which is progressing well. We are eager to join and to contribute to the security of the entire Alliance,” he said.

Haavisto on Wednesday stated a three-day visit to Washington to discuss the progress of Finland’s NATO membership process and the Russian invasion of Ukraine with his US counterpart Antony Blinken.