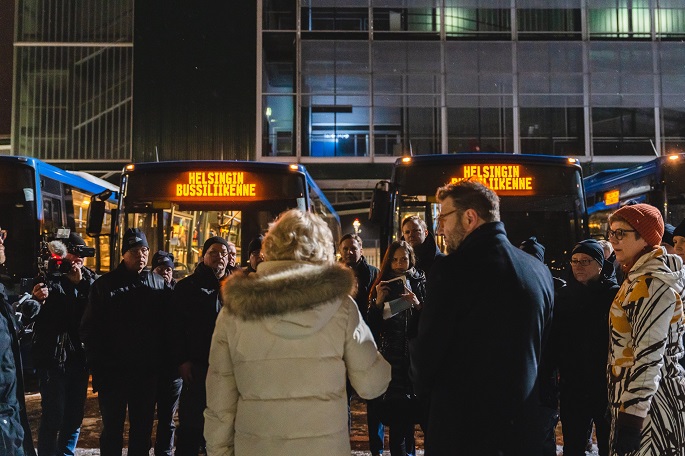 Photo: Ministry of Transport and Communications.

Finland on Wednesday sent buses to Ukraine to be used to transport children and young people to school, said the Ministry of the Interior and Ministry of Transport and Communications in a joint press release.

The donation is part of the European Commission’s solidarity campaign. Russia’s war of aggression has effected an estimated 5.7 million schoolchildren in Ukraine with many schools having been destroyed in bombing.

“Russia has intensified its attacks on civilian targets as winter approaches. The destruction is extensive, and Ukraine needs many forms of help. For example, there is a shortage of functioning vehicles in the country. Finland has also sent Ukraine medicines, healthcare supplies and assistance relating to the energy sector. We will continue to listen to Ukraine’s requests and provide assistance accordingly. I would like to thank everyone who has offered their assistance,” said Minister of the Interior Krista Mikkonen.

Finland will send more busses to Ukraine at the end of the year. The plan is to send at least 20 busses, the first five of which were sent on Wednesday.

The donations from companies are a significant part of the material assistance sent from Finland to Ukraine.

“Even in the midst of war, the Ukrainian people are looking to the future. When the war has been won, Finland can respond to President Zelensky’s request to help Ukraine rebuild its education system. Until then, daily life must go on despite the war. The busses that have now been sent to Ukraine are a concrete way to help children and young people get to school,” said Minister of Transport and Communications Timo Harakka.

The busses are being provided through the European Union Civil Protection Mechanism. The Ministry of the Interior is coordinating the civilian assistance provided by the Finnish Government to Ukraine.

Since the war started in February, Finland has sent 50 truckloads of civilian material assistance to Ukraine and 4 to Moldova. Finland has also sent 6 fire engines and 13 ambulances to Ukraine.

The monetary value of the civilian material assistance is over four million euros. Several shipments with a combined value of several million euros are currently being prepared.