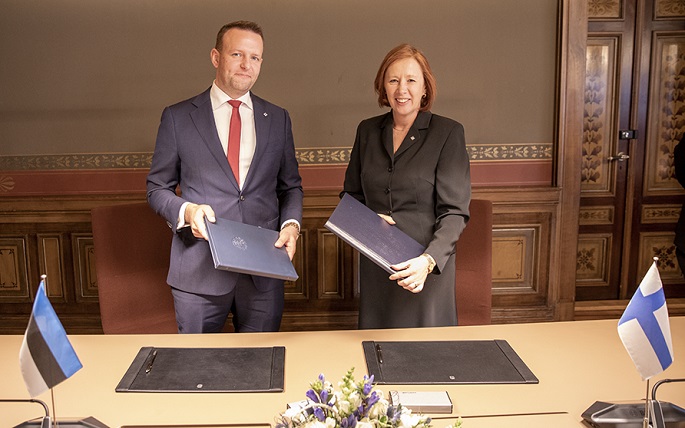 Minister of Local Government Sirpa Paatero and Estonia's Minister of the Interior Lauri Läänemets signed the the exchange of population data treaty in Helsinki on Wednesday. Photo: Ministry of Finance.

Finland and Estonia on Wednesday signed a treaty on the exchange of population data, which. deepens digital cooperation between the countries, said the Ministry of Finance in press release.

Minister of Local Government Sirpa Paatero and Estonia's Minister of the Interior Lauri Läänemets signed the treaty in Helsinki.

The countries have negotiated the treaty since Finland proposed it in 2016.

"It is great that this treaty has finally been signed. It is an important milestone in deepening the cross-border digital cooperation between our countries and lays the foundation for even better public services in both countries," said Paatero.

"The exchange of population register data is an area where we, together with Finland, are a good example for many other EU member states. The longer-term and substantive goal of this cooperation is that people will have access to residence-based services and benefits without having to navigate in a useless bureaucratic maze," said Läänemets.

Finland and Estonia have cooperated in the field of digitalisation for years. They have exchanged population data since 2005 under an administrative contract between Estonia's Ministry of the Interior, which serves as the country’s population data authority, and Finland's Digital and Population Data Services Agency.

This new treaty will make the exchange of data more regular and extensive. The electronic exchange of population data also provides a foundation for developing new kinds of cooperation in the future.

Once the treaty enters into force, the basic details of a person moving from one country to the other can be reliably sent from one population data authority to the other electronically. In this connection, a domicile is defined for the person so that they cannot be left without a domicile and cannot have a domicile in both countries at the same time.

In addition, the exchange of data will be expanded to apply not only to Finnish and Estonian nationals, but also to citizens of other countries who are resident in Finland or Estonia.

Because the treaty includes provisions of a legislative nature, Parliament must approve the treaty before the treaty can enter into force and the exchange of data can begin.

The intention is to circulate the government proposal concerning approval of the treaty for comments by the end of September, and the actual proposal will be submitted to Parliament before the end of the year.

The entry into force of the treaty will also depend on the time required for its technical implementation. The treaty would enter into force in autumn 2023 at the earliest.