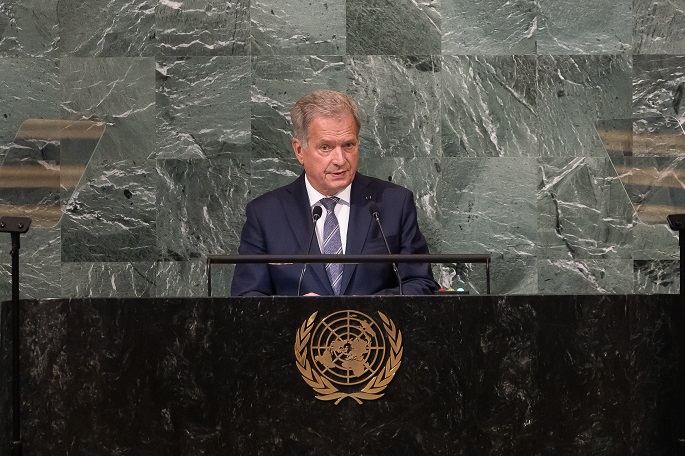 President Sauli Niinistö said that the effects of Russia’s brutal war in Ukraine are already far-reaching and serious and worsen the existing problems of the international community.

“Russia is waging a brutal war in Ukraine. The ripple effects of the war are already far-reaching and serious. The They worsen the problems already faced by the international community,” Niinistö said in his speech at the 77th General Debate of the United Nations General Assembly in New York on Tuesday.

He pointed out that the triple crisis of energy, food security and finance is testing countries in a particularly vulnerable position.

“Countries that are already suffering the most from the climate crisis and the covid-19 pandemic. The global food crisis was a reality even before the Russian invasion of Ukraine. More than 800 million people in the world lived in constant hunger. War makes this disaster even worse,” said the President.

He also thanked the UN Secretary General and the President of Turkey for their tireless efforts to reach an agreement to secure Ukrainian grain shipments.

“If the agreement is implemented as planned, it will have a major impact on the lives of tens of millions of people in need,” he said.

In addition to fighting climate change, he emphasized the need to honor the commitment made at COP26 in Glasgow to double adaptation funding.

“I would also like to emphasize that combating climate change and taking care of the economy do not contradict each other. The green transition offers huge opportunities to create jobs, innovation and economic growth. But it must be done fairly,” the President added.

He also underscored the importance of defending the human dignity by the member states.

“We – the Member States – have to fulfill this task. Despite our failures, we also have achievements to build on. The UN Human Rights Council has shown determination. It has sought to ensure that the perpetrators of the horrific acts against civilians in Ukraine and Syria are brought to justice. It has raised its voice in support of women and girls in Afghanistan,” said Niinistö.

He said that the number of conflicts in the world is the highest since the Second World War.

“A quarter of humanity lives in countries affected by conflicts. We must not ignore or forget Afghanistan, Myanmar, Syria, Yemen and other countries where human rights or conditions for a decent life are threatened,” he added.