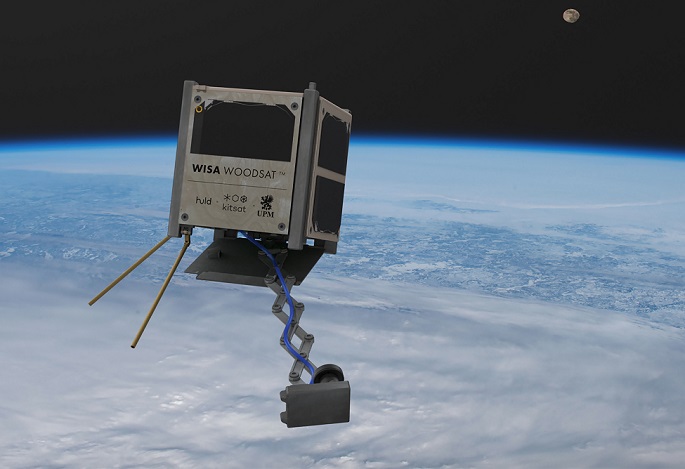 Finland will launch the world’s first-ever wooden satellite WISA Woodsatt into Earth’s orbit by the end of 2021.

Finnish space companies Arctic Astronautics and Huld, together with the forest-based bio-industry company UPM Plywood announced the joint mission on Monday, said the UPM Plywood in a press release.

WISA Woodsat will go where no wood has gone before. With a mission to gather data on the behaviour and durability of plywood over an extended period in the harsh temperatures, vacuum, and radiation of space in order to assess the use of wood materials in space structures.

WISA Woodsat is a nanosatellite designed and built by Arctic Astronautics and it is based on the Kitsat educational satellite.

The satellite measures roughly 10 x 10 x 10cm and weighs one kilogram. A suite of onboard sensors, including two cameras will be used to monitor the specially coated WISA®-Birch plywood. One of these cameras is situated on a deployable boom for exterior imaging.

The space materials laboratory of the European Space Agency will also provide a novel sensor suite for the mission. And all of this will be powered by nine small solar cells.

“The wooden satellite with a selfie stick will surely bring goodwill and raise smiles but essentially this is a serious science and technology endeavour. In addition to testing plywood, the satellite will demonstrate accessible radio amateur satellite communication, host several secondary technology experiments, validate the Kitsat platform in orbit, and popularise space technology to the public,” said WISA Woodsat Mission Manager Jari Mäkinen of Arctic Astronautics.

“UPM’s mission as a company is to create a future beyond fossils. WISA Woodsat is made of plywood and it carries a profound message of replacing fossils with renewable wood-based materials also in very demanding applications. Houston, we have a solution,” said UPM Plywood Space Project Manager Ari Voutilainen.

“Huld is extremely proud to be part of this mission as it combines Huld’s main competence areas, space and mechanical design. We foresee a lot of possibilities in the future by using the knowhow developed in this mission,” said Huld Space Business Development Director Matti Anttila.

WISA Woodsat will be launched to polar orbit by Rocket Lab’s Electron launch vehicle. The launch will take place from the Mahia Peninsula launch complex in New Zealand. The satellite will orbit the Earth at an altitude of 500–550 kilometres, completing a full orbit every hour and a half.

The manufacturing of the satellite is going on and next up are the tests required for a ticket to ride the rocket.