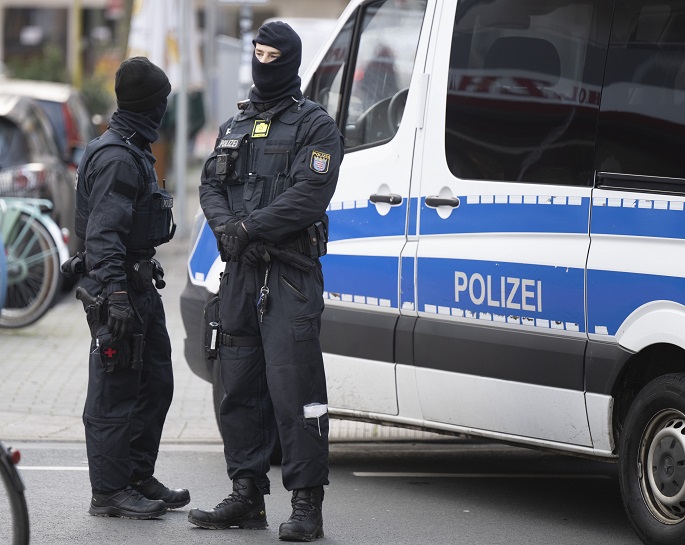 Police officers stand next to a searched property in Frankfurt during a raid against so-called "Reich citizens". Photo: Boris Roessler/dpa.

An active German soldier, a Berlin judge, and a member of a noble family were among dozens of suspects detained on Wednesday during nationwide raids targeting a right-wing extremist group that allegedly aimed to overthrow the German government, reported dpa.

Raids involving around 3,000 police officers took place in 11 of Germany's 16 states. Some 130 locations were searched. One suspect - a former army officer - was arrested in Italy, near Perugia.

Followers of the Reichsbürger ideology, which is fuelled by conspiracy theories, often believe in the continued existence of Imperial or Nazi Germany, under a German Reich based on pre-World War II borders.

Reichsbürger fundamentally reject the state, its elected representatives and the entire legal system, according to the Verfassungsschutz agency for domestic intelligence.

The active soldier was assigned to the staff of the Bundeswehr's Special Forces Command (KSK), a spokesperson for the Military Counter-Intelligence Service (MAD) told dpa. According to information obtained by dpa, he is a non-commissioned officer.

The soldier's house and his office in the Graf Zeppelin barracks in the south-western state of Baden-Württemberg were searched as part of the raids.

Also among the suspects is a Berlin judge and former member of parliament for the far-right Alternative for Germany party, Birgit Malsack-Winkemann. She would no longer carry out her normal judicial duties, the court said on Wednesday.

One of the ringleaders, now in custody, is Heinrich XIII, who goes under the title Prince Reuss of Greiz.

The 71-year-old businessman from the central state of Hesse is said to have been the chairman of the group's central committee - with the aim of becoming a "future head of state" if there was a coup. He had allegedly tried to contact Russian officials as part of his apparent attempt to install himself as leader.

The Kremlin on Wednesday denied any role in the movement.

Members of the Reichsbürger movement often refuse to pay taxes and are convinced that Germany is run by members of a so-called "deep state" - a conspiracy theory also prevalent in other countries.

Germany's domestic intelligence agency estimates that the movement has around 21,000 adherents.

The starting point of the investigation revealed on Wednesday was said to be links between members of the targeted group and members of the United Patriots group in Germany. United Patriots members arrested in April are accused of wanting to kidnap Health Minister Karl Lauterbach over Germany's Covid-19 policies.

Twenty-two of those arrested on Wednesday are accused of being members of a terrorist group, while three others are suspected of being supporters of the organization. In addition, there are 27 others accused in connection with the case, prosecutors said.

The members had founded the group by the end of November 2021 at the latest.

It was apparently highly organized, with a decision-making "council," including departments such as justice, foreign affairs and health.

"The members of the 'council' had met regularly in secret since November 2021 to plan the intended takeover of power in Germany and the establishment of their own state structures," the federal prosecutor's office said.

In addition to the 'council,' the group apparently had a military arm. "This military arm is there to build up a new German army," Attorney General Peter Frank told reporters in Karlsruhe.

"According to our findings, the aim of the association is to eliminate the existing state order in Germany, the basic free democratic order, using violence and military means," Frank said, adding that they were also motivated by the the "QAnon ideology."

The alleged plans to topple the government revealed "the abyss of a terrorist threat," according to Interior Minister Nancy Faeser.

The perpetrators were "driven by violent coup fantasies and conspiracy theories," she said.

"Militant Reichsbürger are united by their hatred of democracy, of our state and of people who stand up for our community," she said.

Parliamentary leaders of the three coalition parties - the Social Democrats, the Greens and the Free Democrats (FDP) - also condemned the movement in a joint press conference.

"We take what we have experienced today very seriously. Right-wing extremist terrorism is one of the greatest dangers to our democracy," said Greens faction leader Katharina Dröge.

The officials noted that a former lawmaker of the far-right Alternative for Germany party was among the suspects. The FDP's Christian Dürr said the party was interested only "in the destruction of parliamentary democracy."