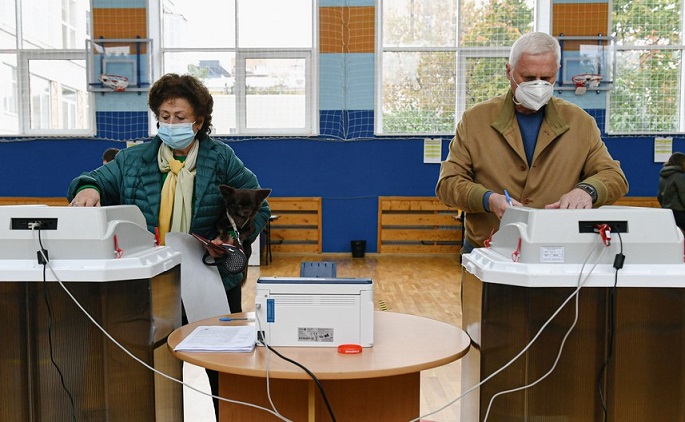 People cast their votes into the ballot box during the elections of the State Duma of Russia, in Moscow, Russia, Sept. 19, 2021. Photo: Xinhua.

The United Russia, the country's ruling party, has retained the "constitutional majority" in the lower house of parliament, preliminary results of State Duma elections showed on Monday, reported Xinhua.

With 99.94 percent of the ballots counted, the United Russia won 49.82 percent of the votes, according to data published by the country's Central Election Commission (CEC).

The Communist Party of Russia came second garnering 18.93 percent of the votes, followed by the Liberal Democratic Party with 7.55 percent, A Just Russia - Patriots - For Truth party with 7.46 percent, and the New People party established last year with 5.32 percent.

For the first time in 18 years, five political parties crossed the five-percent threshold to enter the State Duma.

A mixed electoral system is used to fill the 450 seats in every five years. Half of the lawmakers are chosen by a party-list proportional representation mechanism and the other half are selected in single-mandate constituencies.

As the United Russia's candidates are leading in 198 of the 225 constituencies after 99.95 percent of the votes were processed, the ruling party founded by President Vladimir Putin will hold over 300 seats in the new State Duma.

The Communist Party will get notably more seats than currently, while the Liberal Democratic Party will have its deputies almost halved.

CEC head Ella Pamfilova said that the results of the elections, which were held on Sept. 17-19 both online and offline, will be officially confirmed on Friday.