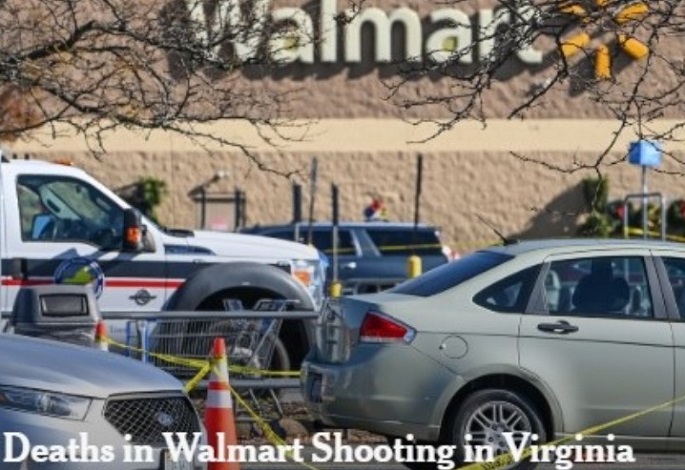 A shooting at a Walmart in Chesapeake of U.S. state of Virginia late Tuesday night killed six people, according to police on Wednesday, reported Xinhua.

Chesapeake Police Chief Mark Solesky told reporters that the gunman -- believed to be one of the store's employees -- died from a self-inflicted gunshot wound.

The call reporting the shooting came in at 10:12 p.m. Tuesday (0312 GMT Wednesday), triggering a large police presence outside the supermarket overnight.

"This investigation is still ongoing, so there's no clear motive at this time," Solesky said. "We'll be processing that scene for days."

The Federal Bureau of Investigation's field office in Norfolk, Virginia, said that it continues to assist Chesapeake Police as they investigate the Walmart shooting.

Walmart, a retail corporation, said in a statement early Wednesday morning that they "are shocked at this tragic event at our Chesapeake, Virginia store."

"We're praying for those impacted, the community, and our associates," the statement read. "We're working closely with law enforcement, and we are focused on supporting our associates."

Kevin Harper, a Walmart employee who managed to flee the Chesapeake store, claimed that it was the manager who carried out the shooting.

"We lost a few of our associates," Harper said in a video shared on social media. "I just left out of the break room, the manager comes in there and started capping people up in there. Started shooting bro."

Briana Tyler, another employee at the Walmart in Chesapeake, told ABC News that "I looked up and my manager just opened the door and he just opened fire."

"He wasn't aiming at anybody specifically," Tyler recalled. "He just literally started shooting throughout the entire break room and I watched multiple people just drop down to the floor, whether they were trying to duck for cover or they were hit."

Tyler said the gunman looked "directly at" her and fired but "luckily missed" her head by "an inch or two."

The Walmart shooting came a day before the United States celebrates Thanksgiving Day.

U.S. President Joe Biden issued a statement on Wednesday morning, saying that "because of yet another horrific and senseless act of violence, there are now even more tables across the country that will have empty seats this Thanksgiving."

Virginia Governor Glenn Youngkin said on Wednesday that he remains "in contact with law enforcement officials" and that he has "made available any resources as this investigation moves forward."

"Our hearts break with the community of Chesapeake this morning," Youngkin added. "Heinous acts of violence have no place in our communities."

The City of Chesapeake also dismissed "rumors of an active shooter at Target in Chesapeake" on Wednesday.

"Please help us control rumors by only sharing information from this account," the city tweeted.

The United States has suffered more than 600 mass shootings so far this year, according to the Gun Violence Archive.

The nonprofit tallies a mass shooting as an incident involving at least four individuals killed or injured, not including the shooter.

This was the second time in a month that Virginia had seen a mass shooting.

On the night of Nov. 13, a shooter fatally shot three people and injured two others at the University of Virginia (UVA) in Charlottesville.

Four of the victims, including the three who died, were members of the UVA football team.

The past weekend, carnage also occurred at an LGBTQ nightclub in Colorado Springs, Colorado, with a gunman killing five people and injuring 19 others.

The suspect, who's facing multiple murder and hate crime charges over the attack, is expected to attend a court hearing via video conference on Wednesday.