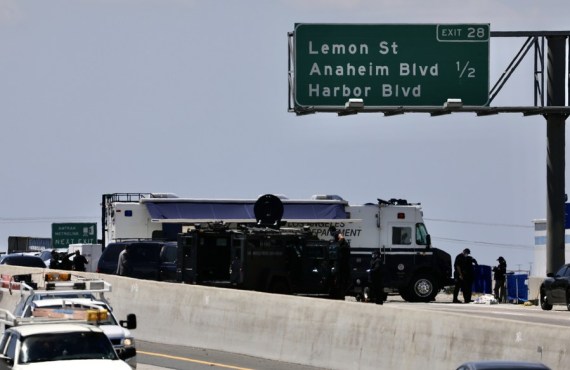 Police officers investigate at the scene where the gunman was killed in Fullerton shootout in Los Angeles, California, the United States, April 27, 2021. File Photo: Xinhua.

Los Angeles Mayor Eric Garcetti told a press conference Thursday that there were nearly 400 killings in the second largest U.S. city, the most in a single year over the last 15 years, reported Xinhua.

According to an annual crime statistics release by the mayor, last year recorded 397 homicides, up by 42 from 2020 and second only to 480 killings in 2006.

Overall, crime was up in Los Angeles last year over 2020. All Part 1 crimes, including murder, manslaughter, sex offenses, robbery, aggravated assault, burglary, motor vehicle theft, and arson, went up 4.6 percent while property crimes were up 4.2 percent, and violent crimes were up 3.9 percent.

The Chief of Los Angeles Police Department (LAPD) Michel Moore noted that the disastrous fallout of COVID-19 hit Angelinos both financially and psychologically, and the city and country failed to meet the increasing demands for all types of services for those being left behind.

However, compared to the violence in the 1980s and 90s, the last two years were still among the safest in the city's history.