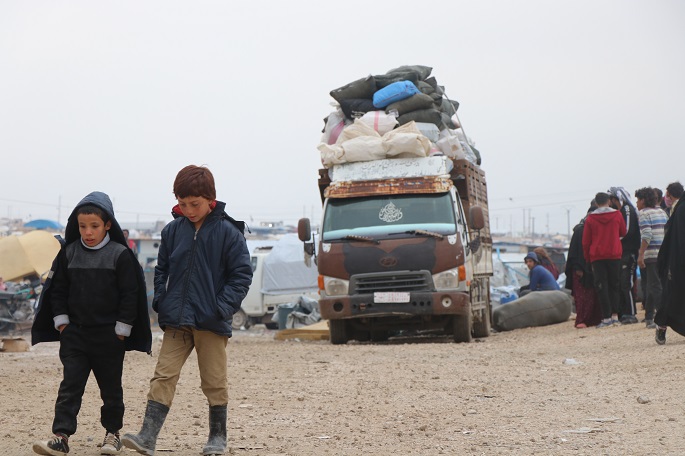 Two kids talk with each other as displaced people prepare to leave the al-Hol camp run by the Kurdish militias in the northeastern province of Hasakah, Syria, Nov. 16, 2020. File Photo: Xinhua.

UN humanitarians on Thursday condemned increasing violence and the slaying of an aid worker in al-Hol, the largest camp for displaced people and refugees in Syria, reported Xinhua.

The killing on Tuesday followed an armed attack on a health facility in the camp, the UN Office for the Coordination of Humanitarian Affairs (OCHA) said.

"On behalf of the entire humanitarian community in Syria, the two senior UN officials expressed condolences to the family, friends, and colleagues of the victim," OCHA reported. Neither the identity of the victim nor the exact circumstances of the slaying were immediately available.

"They also called on all parties with influence to ensure appropriate security measures to allow humanitarian assistance to continue to be delivered in a safe and effective manner," the office said.

The camp in northeast Syria "continues to see a significant decline in the rule of law and increased violence among residents, with a range of appalling attacks reported," the office said. This is the first death in al-Hol of an aid worker or resident this year.

Last year, 89 Syrian and Iraqi camp residents, including one humanitarian worker, were killed, OCHA said. The camp is the largest for refugees and internally displaced people in Syria, with around 56,000 people, over half of whom are under 18.

"The UN and other humanitarian organizations remain committed to mobilizing and delivering regular life-saving and essential aid to al-Hol," the office said. "But their work can only be effective when steps are taken to address persistent safety issues."

Camp residents in al-Hol "need dignified, informed, and durable solutions to their displacement," OCHA said. "The United Nations reiterates its call for all responsible parties to take urgent and meaningful action to resolve this issue and uphold the rights, dignity, and humanity of each individual living in al-Hol."