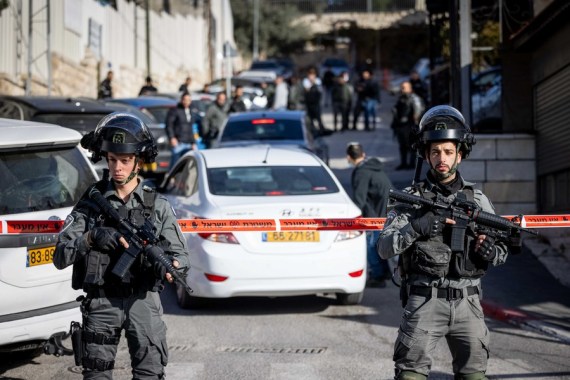 Israeli police officers stand guard at the scene of a stabbing attack in East Jerusalem on Dec. 8, 2021. Photo: JINI via Xinhua.

The Israeli police said it arrested a 14-year-old Palestinian girl who carried out a stabbing attack in East Jerusalem on Wednesday, reported Xinhua.

The police said in a statement that the minor is suspected of stabbing a 26-year-old Israeli woman who was walking with her children, using a 30-cm-long knife.

The woman sustained light injuries and needed hospital care, according to a statement issued by the Hadassah Hospital where she has been treated.

The girl was arrested and questioned about an hour after the incident inside a nearby high school, the police said.

The attack took place in Sheikh Jarrah, a Palestinian neighborhood in East Jerusalem, where the planned eviction of several Palestinian families from their homes to make room for Israeli settlers sparks frequent protests and clashes between Palestinians and the police.

This was the latest in a string of lone-wolf Palestinian attacks against Israeli armed forces and settlers. On Monday, a 16-year-old Palestinian teenager rammed a car into an Israeli checkpoint in the occupied West Bank, injuring a security guard, before he was shot and killed by Israeli forces.

On Saturday, a 23-year-old Palestinian from the West Bank stabbed and wounded an Israeli civilian outside East Jerusalem's Old City. The young man attempted to stab police officers before they shot him dead.

Israel captured the West Bank, including East Jerusalem, in the 1967 Middle East war and has been controlling it ever since despite international criticism.