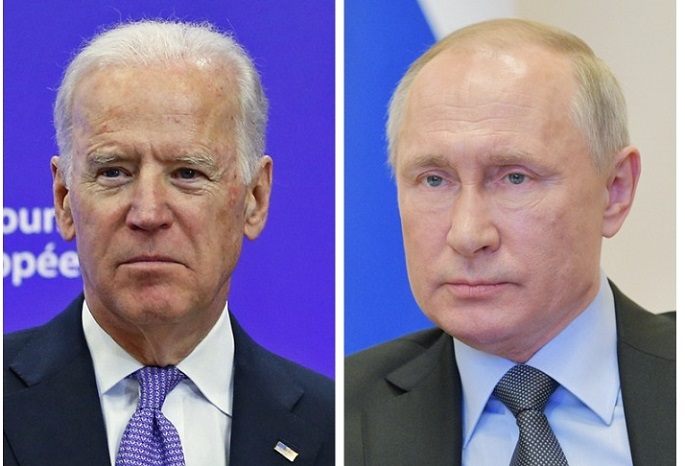 No breakthrough was achieved after U.S. President Joe Biden and his Russian counterpart Vladimir Putin, met via video link on Tuesday, which touched upon such topics as the situation in Ukraine, the Iran nuclear deal, and bilateral ties between the two countries, reported Xinhua.

The meeting marked the second talks in six months between the two leaders, the Kremlin said in a statement after the two-hour virtual conversation.

The summit ended with little progress, as Russian analysts and officials had forecast, expecting that there will be "controlled confrontation" between the two sides.

On the situation in Ukraine, Biden threatened to take "strong economic and other measures" together with U.S. allies against Moscow should Russia invaded Ukraine as the West alleged.

In response, Putin criticized the North Atlantic Treaty Organization (NATO) for shifting its responsibility onto Moscow, stressing that it is NATO that is attempting to "conquer Ukrainian territory" and is building up military potential near the Russian borders.

Putin asked Biden for a "reliable, legally fixed" guarantee that NATO will not expand in the eastern direction and not deploy offensive weapons near Russia, but Biden "made no concessions" regarding Ukraine's possible NATO membership, according to U.S. National Security Advisor Jake Sullivan.

"There were no breakthroughs," Kremlin aide Yuri Ushakov said after the summit, adding that it could take more than one year for ties to thaw since so many problems have accumulated.

"The contradictions between the countries are intractable," said Sergei Kislitsyn, head of the Center for Strategic Planning Studies at the Institute of World Economy and International Relations, Russian Academy of Sciences.

"I can't quite picture where there will be breakthroughs. After all, any simple moves in the framework of bilateral ties, including the extension of the New Strategic Arms Reduction Treaty, have already taken place," he said.

Although analysts did not anticipate better Russian-U.S. relations, they agree that the two countries are trying to confine confrontation to a relatively narrow range as both sides can't afford a direct military conflict.

The Kremlin called the Putin-Biden meeting "sincere and business-like" and the presidents agreed to continue dialogue and necessary contacts.

"The very fact that the negotiations between the leaders actually took place means that Washington is still more inclined towards dialogue than confrontation," said Andrei Kortunov, Director General of the Russian International Affairs Council.

Biden needs some kind of agreements with Putin to show that he is able to resolve issues as his approval ratings are plummeting over domestic affairs in the United States, said Yuri Rogulev, director of the Franklin D. Roosevelt Foundation for U.S. Studies at the Moscow State University.

Nikita Danyuk, deputy director of the Institute for Strategic Studies and Predictions of RUDN University, forecast that there will be "controlled confrontation" between Russia and the United States.

Negotiations on Ukraine, strategic stability and global security will continue, but sanctions pressure will also continue with Russia being defamed, he said.