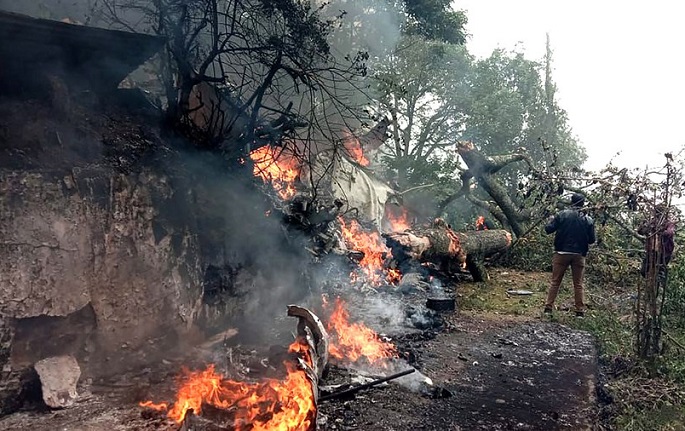 The helicopter crashed at Coonoor area of Nilgiris district, about 538 km southwest of Chennai, the capital city of Tamil Nadu.

Officials have not confirmed the casualties, citing sensitivity and protocol reason.

The cause of the crash was not immediately known, while low visibility and foggy conditions were reported in the area.

According to reports, 14 people including nine passengers and five crew members were on board, and Rawat's wife was also accompanying him when the aircraft crashed.

Indian Defense Minister Rajnath Singh will be addressing the parliament, which is currently in session, on the helicopter crash. Reports said Singh had visited the residence of Rawat in New Delhi.

The Indian Air Force (IAF) confirmed that Rawat was on board at the time of the crash.

"An IAF Mi-17V5 helicopter, with CDS Gen Bipin Rawat on board, met with an accident today near Coonoor, Tamil Nadu," the IAF said in a brief statement. "An Inquiry has been ordered to ascertain the cause of the accident."

Reports said the helicopter had taken off from the Sulur air base in Coimbatore and was on its way to Defence Services Staff College in Wellington in Nilgiris when the crash took place.

Photographs and TV footage aired on local news channels show the helicopter wreckage, along with thick smoke and fire on the spot. The TV footage also showed injured or dead being carried from the spot down a steep slope.

Many locals have assembled at the spot and were helping in dousing the flame.

Police and local government officials in Tamil Nadu have rushed to the spot, officials said. The chief minister of Tamil Nadu is scheduled to reach the crash site, reports said.

Rawat took charge as India's first CDS on Dec. 31, 2019 after serving as the army chief for a full three-year term.

IAF's Mi-17V5 helicopter is a twin-engine chopper considered as one of the advanced military transport helicopters. It is deployed in troops, arms transport, patrol as well as search and rescue missions.