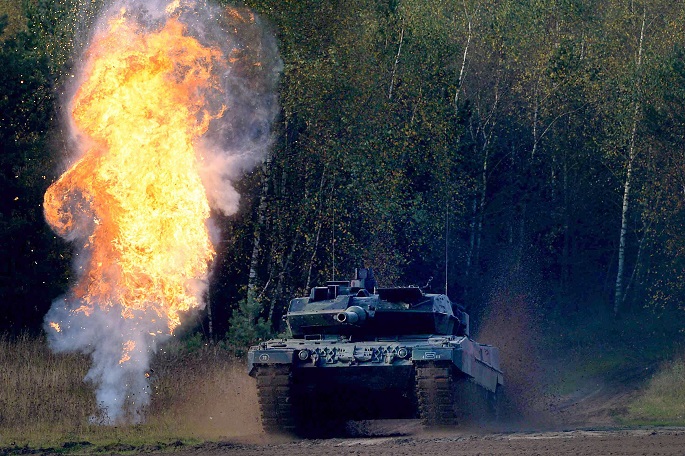 A Leopard 2A6 tank drives through the terrain during a "Landoperation" training session. Photo: picture alliance / dpa.

Germany intends to deliver 14 Leopard 2A6 main battle tanks from its own military stocks, government spokesperson Steffen Hebestreit said, acceding to repeated requests from Kiev for heavy weaponry that could help it retake territory annexed by Russia during the war, reported dpa.

The goal is to quickly assemble two tank battalions with Leopard 2s by collecting tanks from other European countries, Hebestreit said.

The German government would issue the necessary export licences, Hebestreit confirmed, marking an official end to weeks - if not months - of speculation and hand-wringing in Berlin over the delivery of the tanks.

The support package would also include training, logistics and ammunition.

Chancellor Olaf Scholz defended the landmark decision in a speech in the German parliament, or Bundestag.

He said that in providing military support to Ukraine, Germany was acting according to the principle of making possible what was necessary while avoiding an escalation into a confrontation between NATO and Russia. "We will continue to observe this principle," he said.

Scholz rejected accusations that Germany had done too little to provide military support to Ukraine. "Germany will always be out in front when it comes to supporting Ukraine," he said.

The first Leopard battle tanks from Germany could be in Ukraine in about three months, Defence Minister Boris Pistorius said.

However, he also said: "This is not a reason for rejoicing," adding that he had great understanding for those who were worried. "But what is clear is that we will not become a party to the war, we will make sure of that."

Scholz also drew a red line, saying that there would be no fighter jets and no NATO ground troops in Ukraine.

Scholz's deputy in the coalition government, Robert Habeck, backed the chancellor's decision on the tanks, saying it was "absolutely logical."

Support for the German decision came from leaders across Europe, from neighbouring Poland to France and Britain, as well as from the Western military alliance NATO.

The decision to grant export licences means that Ukraine can expect the delivery of many more tanks from a number of countries.

Poland and Finland had already announced their intention to send the vehicles, and Spain on Wednesday joined that group.

A damning response from Russia on Wednesday called up historical comparisons with World War II.

"Berlin's decision to supply Kiev with Leopard 2 tanks is extremely dangerous because it raises the conflict to a new level of confrontation," Ambassador to Berlin Sergei Nechaev said.

"Berlin's decision means a final renunciation by the Federal Republic of Germany of its admission of historical responsibility towards our people for the terrible crimes of Nazism in the Great Patriotic War, which are not subject to a statute of limitations," he said.

German tanks were being sent to the "Eastern Front" again, which meant not only the death of Russian soldiers, but also of the civilian population, Nechaev said.

Not everyone in Germany praised the plan to send the tanks.

The operational readiness of the German armed forces would be further weakened if the tanks were supplied to Ukraine, the chairman of the Bundeswehr Association, André Wüstner, said ahead of the widely-reported decision.

The delivery is "good for Ukraine on the one hand, bad for the operational readiness of the Bundeswehr on the other," Wüstner told the public broadcaster ZDF.

Politicians from the hard-left Die Linke (The Left) party called it a "historic mistake" by Scholz's Social Democrats.