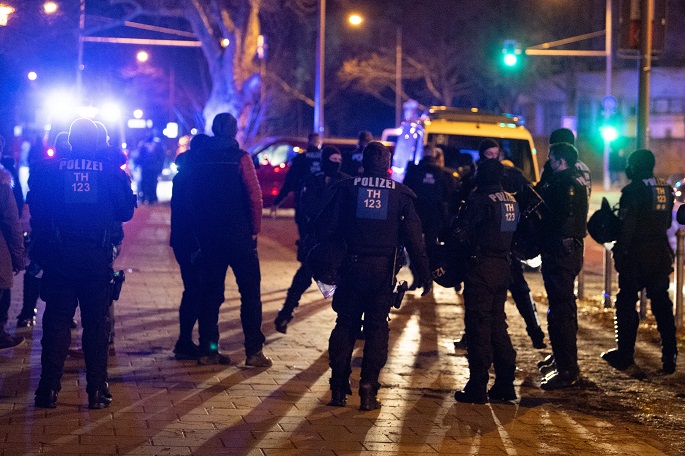 Opponents of vaccination and critics of Coronavirus measures stand behind police during a protest against Corona measures and a possible mandatory vaccination in Germany not far from Dresden University Hospital. Photo: Sebastian Kahnert/Zentralbild/dpa.

German police ended a demonstration in the eastern city of Dresden against government-imposed anti-coronavirus measures on Thursday evening, reported dpa.

The city's university hospital was the target of the protest, which was billed by organizers as simply a "walk" amid tough restrictions on public gatherings, and had been called for on messaging apps like Telegram.

Medical students stood in front of the hospital grounds to protect the building. They lined up in white coats and carried signs with slogans such as "Vaccinate don't rant" and "No power to the reckless."

A large deployment of police officers repeatedly asked groups of people to disperse and move on.

Currently, only demonstrations with a maximum of 10 participants are allowed in Saxony, of which Dresden is the state capital.

The police took down the personal details of several participants. At least 45 charges were filed for violations of Saxony's coronavirus emergency ordinance, the police said on Twitter.

Police secured the grounds of the university hospital. There were police cars at every entrance, according to a dpa reporter.

Two water cannon were on stand-by at the scene and a helicopter circled over the city.