Vaccine mandate is 'way out of pandemic’: German minister 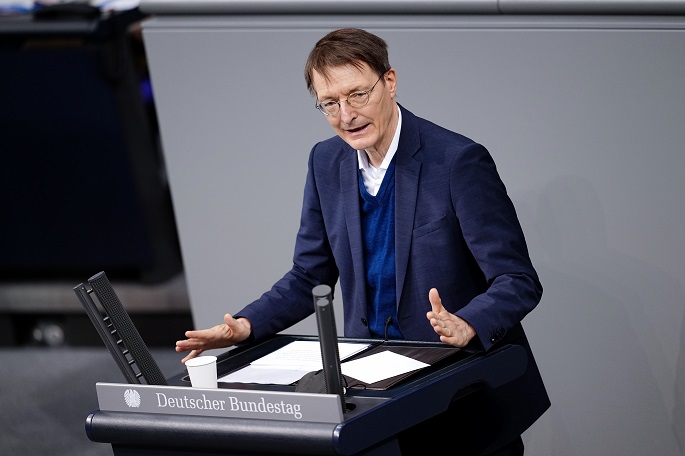 German Health Minister Karl Lauterbach speaks during a session held on the second day of the debate on the policies of the traffic light coalition at the German Bundestag. Photo: Kay Nietfeld/dpa.

The German government has upped its rhetoric in favour of compulsory vaccination in the last two days as the government's coronavirus policy is fiercely debated in parliament, reported dpa.

Germany's Health Minister Karl Lauterbach described a vaccine mandate as "the safest and fastest way out of the pandemic," in a speech to the Bundestag.

Lauterbach, himself a qualified doctor, said that "with the largest possible proportion of the population vaccinated, we can expect to avoid serious cases, even with new variants of the coronavirus."

The government has set a target of having 80 per cent of the population double-vaccinated by the end of the month.

A vaccine mandate would help protect people against more dangerous variants are likely to emerge in the future, Lauterbach said.

On Wednesday, Chancellor Olaf Scholz told parliament that he supported a vaccine mandate for all citizens aged 18 and over.

Some of his coalition partners - notably the pro-business Free Democrats - are not convinced, however.

Ignoring calls from conservative opposition leaders in parliament for rapid action by his Cabinet on a vaccine mandate, Scholz has said that lawmakers in the Bundestag should put forward their own proposals.

Aside from the political debate, there was good news for the government when it comes to vaccinations on Thursday, with signs that the vaccination rate was in any case picking up, and with the country's top vaccine body saying it was in favour of booster shots for 12-17 year olds.

Some 780,000 doses of coronavirus vaccines were administered on Wednesday, 66,000 more than on Tuesday and considerably more than the average of 593,000 per day in the past week.

Many of these were for booster shots, which have been received by 37.5 million people, or 45.1 per cent of the population.

The proportion of the population that is double vaccinated crept up to 72.3 per cent, according to the national disease control institute RKI on Thursday.

Asked earlier on Thursday whether the government would meet its 80-per-cent target by the end of January, Lauterbach told The Pioneer news portal: "One thing is clear: it will be very difficult ... We must work at full steam."

Meanwhile, infections are reaching daily highs as the Omicron variant courses through the population.

The RKI reported 81,417 coronavirus infections within 24 hours - about 17,000 more than the equivalent figure a week ago. The rate of hospitalizations during the past week remained steady, however, with the seven-day incidence of hospitalization per 100,000 people at 3.09, slightly lower than the day before.

Later, the parliament is expected to approve legislation for shorter quarantine periods, in rules already agreed by state and federal leaders.

According to the new rules, people who have had a booster shot and subsequently come into contact with an infected person will no longer have to quarantine; the quarantine for many other groups who have not had a booster will be shortened to seven days provided a negative PCR (polymerase chain reaction) or antigen test is logged; for children at school and nursery it will be five days, assuming a negative test.