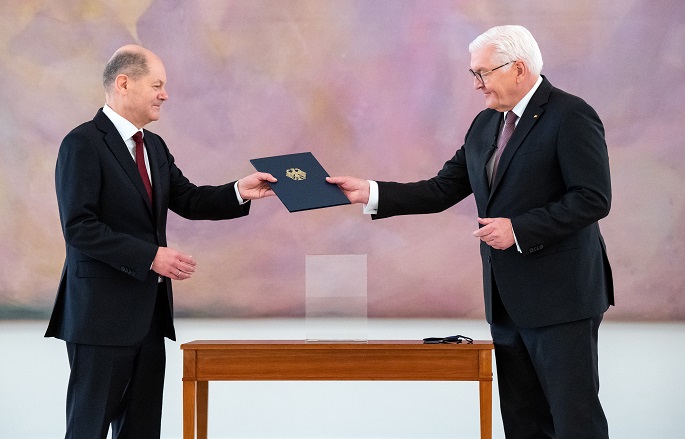 Angela Merkel's 16-year career as German chancellor came to an end on Wednesday as she handed over to her successor Olaf Scholz at the chancellery in Berlin, reported dpa.

"Take ownership of this house and work for the best of our country," Merkel told her successor and former deputy.

The long-serving chancellor, who has been a dominant figure in European and global politics, warned Scholz that the job could be challenging. "But if you approach it with joy, it is perhaps one of the most beautiful tasks there is to bear responsibility for this country."

Scholz will lead a centre-left government comprising his Social Democrats (SPD), the Greens and the pro-business Free Democrats (FDP) in a three-way "traffic light" coalition - named on account of the party colours - the first of its kind at federal level.

After a vote in the Bundestag that went overwhelmingly along party lines, Scholz went to the presidential Bellevue palace, where President Frank-Walter Steinmeier formally appointed him chancellor. He then returned to the Bundestag to be sworn in.

The 16 incoming ministers - eight men and eight women with seven from the SPD, five from the Greens and four from the FDP - then went through a similar process.

The SPD, together with their partners, the Greens and the FDP, have 416 seats in the new parliament elected in September. Calculations by party officials indicated that at least 15 members of the three parties had not voted for Scholz.

Merkel was in the Bundestag to watch the vote, seating herself in the section reserved for guests of the house. On being welcomed by the Bundestag president, all the lawmakers stood to give her a warm round of applause, apart from the 83 members of the far-right Alternative for Germany (AfD).

The Greens have taken the main environmental posts in the new Cabinet, along with the vice chancellorship and the Foreign Ministry, and the FDP the Finance Ministry. The ministers were to meet for the first time later on Wednesday, with Foreign Minister Annalena Baerbock of the Greens embarking on her first trips abroad the same evening.

The election puts a Social Democrat at the head of a German government for the first time since Merkel succeeded Gerhard Schroeder as chancellor in 2005.

Schroeder was in the Bundestag to watch as Scholz was voted in and subsequently gave the new chancellor a full vote of confidence. "Olaf Scholz will do it very, very well," he told broadcaster Welt. "I have great confidence in him and I am for that reason happy."

The new coalition has set itself the targets of combatting the coronavirus pandemic and reducing greenhouse gas emissions, making Germany carbon-neutral by 2045. A rise in the minimum wage is also planned, from the current 9.60 euros per hour to 12 euros per hour.

Among the more controversial items in the coalition deal hammered out over weeks of intensive negotiations is a proposal to allow the arming of military drones to protect German soldiers deployed abroad.

Farewells came in for Merkel on Wednesday, including a video montage from French President Emmanuel Macron addressed to "dear Angela."

Macron also addressed a tweet to Scholz, saying: "We will write the next chapter together, for the French, for the Germans, for Europeans."

Scholz is to pay a visit to Paris on Friday, making the French capital his first port of call in line with long-standing tradition.

The new chancellor then goes to Brussels for talks with European Commission President Ursula von der Leyen and European Council President Charles Michel to prepare the ground for an EU summit next week.

A meeting with NATO General Secretary Jens Stoltenberg is planned for Friday evening.

From China, President Xi Jinping and Prime Minister Li Keqiang offered their congratulations to Scholz in a phone call. Chinese state television reported that Xi had called for an expansion in cooperation between their two countries to take relations "to a new level."

Russian President Vladimir Putin telegrammed Scholz. "I'm banking on entering into a constructive dialogue with you and to work on current issues on the bilateral and international agenda," Putin wrote.

Kremlin spokesperson Dmitry Peskov added: "We are hoping that the German side will continue to proceed on the understanding that there is no alternative to dialogue for removing even the most problematic differences of opinion."

In his telegram, Putin thanked outgoing chancellor Angela Merkel for their "fruitful cooperation" and praised her for her readiness for mutual and respectful dialogue.

Ukrainian President Volodymyr Zelensky expressed the hope that Scholz would help restore his country's territorial integrity and help with its integration into the European Union and NATO.

Zelensky tweeted that he was ready to work with Scholz on developing a partnership in energy, in reference to differences over the Nord Stream 2 gas pipeline linking Germany directly with Russia, which is complete and awaiting regulatory approval.

The September elections gave the SPD a narrow majority over Merkel's conservative bloc, made up of the Christian Democratic Union (CDU) and its Bavarian sister-party, the Christian Social Union (CSU), which has dominated German politics at federal level since World War II.