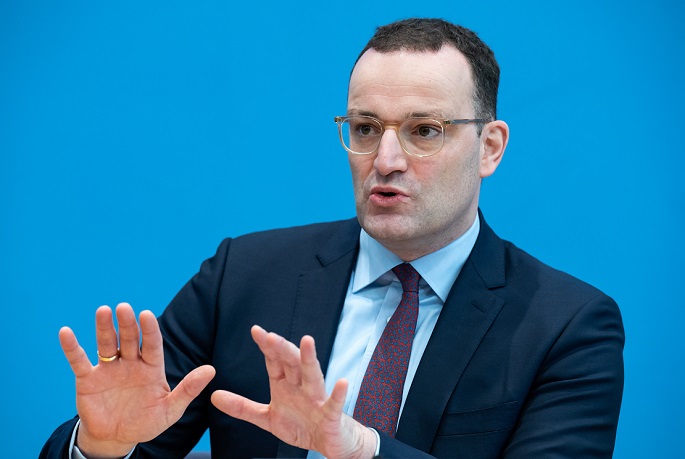 The current wave of the coronavirus pandemic is the worst to hit Germany thus far, Health Minister Jens Spahn said in Berlin on Friday, as he called for a stringent reduction in contact between individuals, reported dpa.

Spahn, who is serving in a caretaker capacity as a new coalition is formed, stopped short of calling for a total lockdown, an option that has been ruled out by the incoming coalition partners.

"The situation is dramatically serious, as serious as at no point in this pandemic to date," Spahn told a press conference in Berlin.

Too little was occurring too late, he said, in implicit criticism of the incoming government.

"We have to stop this wave," Spahn said, expressing concern at the new variant that has surfaced in South Africa and has led European countries, including Germany, to restrict flights from the region.

Speaking with Spahn, the head of Germany's disease control body expressed concern at the variant. "We are in fact very worried," Lothar Wieler, head of the Robert Koch Institute (RKI), said.

He pointed to the multiple mutations in the new variant, particularly on the crucial spike protein that binds to human cells. Wieler said that, to the best of his knowledge, the variant had not been detected in Europe.

Wieler described the situation in stark terms, but also refrained from referring to a lockdown.

"We need a massive reduction in contacts - now and immediately," he said in an appeal to government. "I am now expecting from the decision-takers that they take measures together to bring down the incidence figures," he said.

"We stand at a crossroads. We have a choice. We can take the route that leads to chaos and a bad end ... or the one that eases the burden on the health services and possibly allows a peaceful Christmas and also allows many more people to be at the Christmas table."

BioNTech, the German biotechnology company that came up with a new type of vaccine against Covid-19, said it was probing the new variant and hoped to have results within two weeks.

BioNTech said it had taken steps along with its US partner Pfizer months ago to adapt the vaccine for a so-called "escape" variant. It aims to do so within six weeks and start deliveries of new vaccine within 100 days.

Amid the rising calls for further restrictions, German President Frank-Walter Steinmeier called for schools to be kept open if at all possible.

"It has to be our top priority to keep child daycare centres and schools open," he told a conference of school directors by video link.

The interior minister of the city state of Bremen, Ulrich Maeurer, called for football matches to be halted, citing concerns over exposing police officers to large crowds of unruly fans.

Bavarian Premier Markus Soeder demanded that compulsory vaccination against the coronavirus be implemented from the start of the new year while visiting Rosenheim, a pandemic hotspot in his state.

"We need an effective national containment strategy," said Soeder, an influential voice on the pandemic and the head of a large and economically important state.

He called for a nationwide "emergency brake" and for action to deal with the new variant.

South Africa's neighbours are also likely to be affected by the ban.

The German air force has started transferring Covid-19 patients from regions where hospitals are struggling, to help cope with coronavirus pandemic cases.

A Luftwaffe Airbus A310 MedEvac, with capacity for six patients, took off from Memmingen airport in Bavaria to transfer patients to the north, in the state of North Rhine Westphalia.

Intensive care units at hospitals in the south and east of the country are filling with patients, while there is still spare capacity in the north and west. The situation largely reflects vaccination rates, which differ widely from region to region.

The key DAX index of leading shares traded on the Frankfurt Stock Exchange fell off in sharply in early trading before stabilizing at around 3 per cent down on the opening.

The organizers of the "Green Week," a large agricultural fair held in Berlin every year said they were cancelling the 2022 event, which had been scheduled for 10 days at the end of January.

The Berlin Messe, the fairground that hosts the event, said all major events scheduled for January and February would be put on hold as a result of the pandemic.

The RKI reported a new record level in nationwide infections early on Friday of 76,414 cases detected during the most recent 24-hour period. A week ago, the figure was 52,970.

Vaccination rates vary widely across Germany. Top of the list is the city state of Bremen, with 82.5 per cent of the population fully vaccinated, while Saxony brings up the rear with 60.2 per cent. The national figure is 68.2 per cent.