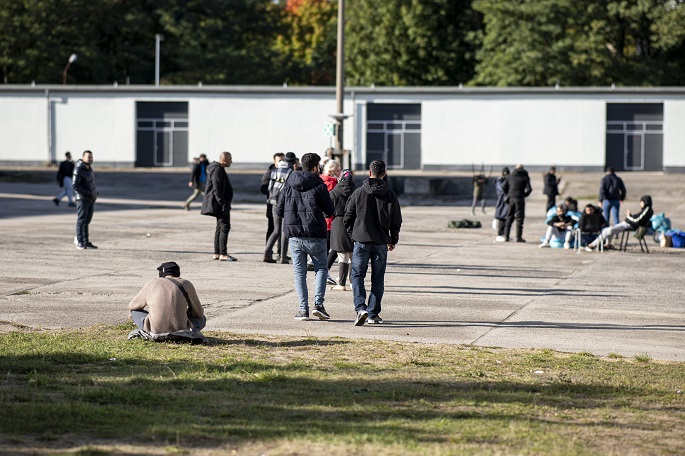 Asylum seekers walk across a space at the initial reception centre in Eisenhüttenstadt. Photo: Fabian Sommer/dpa.

More than 4,300 illegal migrants have entered Germany via the route lying through Belarus and Poland since August, the German Federal Police told dpa on Wednesday, pointing to a sharp rise since earlier in the year.

The migrants were largely from Iraq, Syria, Yemen and Iran, the police said, reported dpa.

For the seven months January to July, a total of 26 people using the route were recorded. In August, this rose to 474, and in September to 1,914.

By October 11, this figure had already been passed, with 1,934 illegal migrants recorded using the route.

The state of Brandenburg, which surrounds Berlin, is currently housing 2,600 in reception centres for asylum-seekers, which are filling up, Olaf Jansen, head of the refugee authority in the eastern city of Eisenhuettenstadt, said.

The normal capacity of 3,500 places was being temporarily increased to 4,600 by means of heated tents.

Jansen said the facilities were not yet overcrowded. "The situation is not drastic, but it is hard," he said. The quarantine measures to contain the spread of the coronavirus were posing a major challenge, he added.

Jansen predicted the migrant numbers would increase. "We are not seeing any efforts to halt this," he told dpa.

In response to sanctions imposed by the European Union, President Alexander Lukaschenko said in May that Belarus would no longer prevent illegal migrants from using his country as a transit route.

EU countries have accused Lukaschenko of deliberately encouraging migrants from crisis regions, and Poland, Latvia and Lithuania have strengthened their border security.