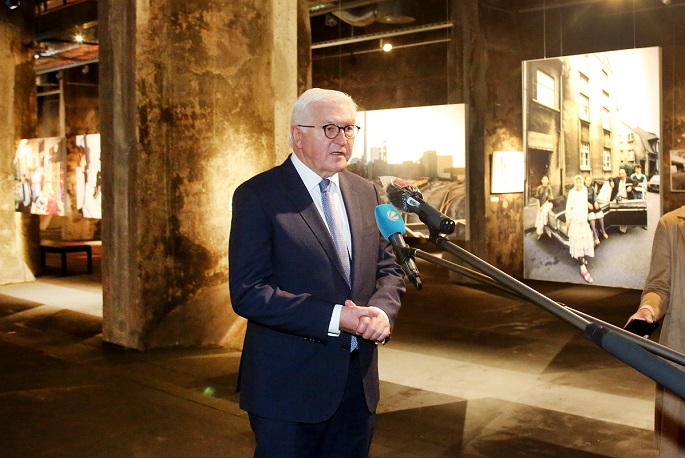 German President Frank-Walter Steinmeier speaks to the media after a tour of the exhibition "Wir sind von hier. Photo: dpa by Roland Weihrauch.

Germany on Tuesday marked the 60th anniversary of a landmark agreement with Turkey that allowed millions of so-called "guest workers" into the country to fill gaps in the labour market, reported dpa.

President Frank-Walter Steinmeier paid tribute to the many achievements of people with an immigrant background during a visit to the country's western Ruhr region and industrial heartland.

"Hundreds of thousands of people from Turkey ... helped to build up the economy in a dynamic period, at a time when there was a shortage of labour in Germany. People who, over the years, have also made our country more diverse and open, and in addition economically stronger," Steinmeier said at the start of his visit to the city of Muelheim.

Together with his wife, Steinmeier visited the Friedrich Wilhelms-Huette steel foundry. Forty-five per cent of the workforce has an immigrant background, many are the second or third generation descendants of the "Gastarbeiter" who came to Germany to work in the 1960s.

"For a long time, work was the major integrating factor," Steinmeier said in conversation with management and staff.

In the 1950s Germany signed several labour agreements with countries including Italy, Spain and Greece to make up for labour shortages after World War II.

But this was not deemed sufficient to keep up the rapid pace of Germany's economic growth and on October 30, 1961 an agreement with Ankara for Turkish workers followed. It was suspended in 1973.

During that period, nearly 4 million guest workers and their family members arrived, many working in the Ruhr area around the cities of Essen, Dortmund and Dusseldorf. Some 2 million stayed in Germany.