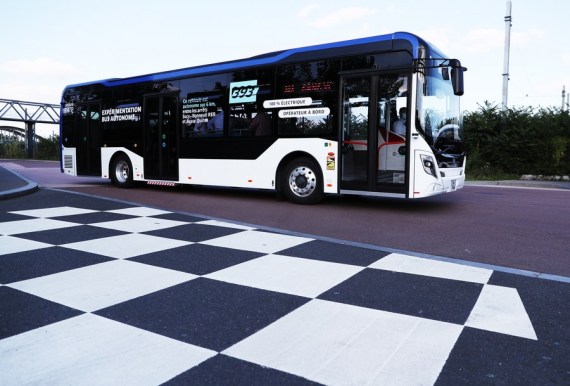 A self-driving bus made by China's CRRC Electric Vehicle is seen during its trial run in Paris, France, Sept. 17, 2021. Photo: Xinhua.

A 12-meter-long self-driving bus made by China's CRRC Electric Vehicle went on trial run on open road in Paris over the weekend, reported Xinhua.

The vehicle cleared a six-kilometer section along a bus route in southeast Paris on Friday. In about 40 minutes, it passed 26 traffic lights and ten bus stops.

The bus is scheduled to start regular passenger services in autumn next year.

Benjamin Joliviere, head of the autonomous bus project of RATP, the French capital's mass transit operator, said the results of the trial were "more than positive." It was the first time in France that a self-driving bus ran on a regular bus route, he said.

Francois Yann, RATP bus driver, sat in the driver's seat during the trial.

"Once we have done the training and have seen the vehicle in operation, we see the performance is actually quite reassuring," he said. "It feels like a technology we were dreaming about when we were kids. And now it happens ..."

This bus features real-time interaction of information about people, vehicle and road conditions, ensuring safety and improving driving efficiency, according to Peng Zhichuan, director of the automation technology at CRRC Electric Vehicle.

"The Chinese technology has been adapted to the French market in collaboration with our company and RATP," said Christelle Tang, president of Clement Bayard, the French company that imports the bus into France.