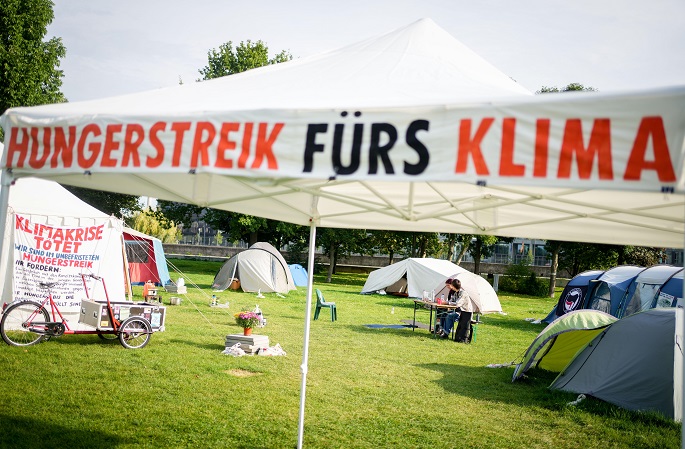 A camp of hunger strikers is set up near the Reichstag building, to call for more climate protection for 17 days and seek a meeting opportunity with the three candidates for German chancellor. Photo: dpa by Kay Nietfeld.

Climate activists on hunger strike in Berlin have given politicians a new ultimatum for a public meeting on tackling climate change, with just days to go before national elections, reported dpa.

Some of the group said on Monday morning that would stop taking liquids if the politicians do not comply.

They called on the three candidates for chancellor - Annalena Baerbock of the Greens, Armin Laschet of the Christian Democrats (CDU) and Olaf Scholz of the Social Democrats (SPD) - to meet by Thursday at 7 pm (1700 GMT).

While some said they would move to a "dry" hunger strike if the meeting did not happen, others indicated a possible end to the strike by saying: "It is no longer worth sacrificing more of our precious lives and health to the candidates for chancellor in order to make them pass this test."

All three candidates for the chancellorship have called on the hunger strikers to end their protest action, and offered talks after the September 26 poll.

Government spokesman Steffen Seibert said on Monday that "actions that are dangerous to health, like this hunger strike, like the threat of not drinking, can only bring concerns about the young people involved."

While climate change was an "immensely important" issue, discussions over policy should take place in a situation where "one side is not a danger to itself," he said.

Climate change has been a central topic during the election campaign, and has regularly appeared at the top of surveys of voters' main concerns.

A group of seven young adults started an open-ended hunger strike in front of the parliament building on August 30.

Their demands include a public discussion with the three candidates on climate change, and the establishment of a citizens' council to determine immediate measures that must be taken to protect the climate. Two of them ended their hunger strike at the weekend.