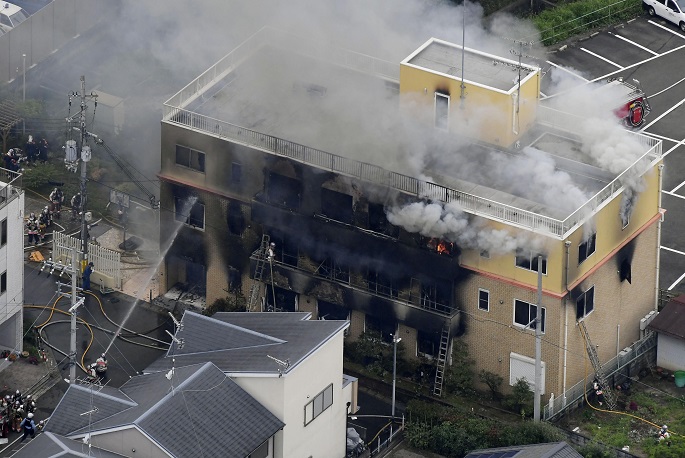 The death toll of an anime studio blaze in Kyoto, Japan, on Thursday has risen to 33, with 36 others injured, some suffering from severe burns or bleeding, local police and rescuers said.

The fire at the three-story building of Kyoto Animation Co., ignited by a man with flammable liquid, is the country's worst case of arson in decades.

Witnesses said that they saw victims who were badly bleeding were rushed to hospital in the incident that took place at around 10:35 a.m. local time in the city's Fushimi Ward on Thursday morning.

"In the face of the large number of casualties and the shocking sight, I am at a loss for words," Japanese Prime Minister Shinzo Abe said in a Twitter post.

Among the injured, 10 suffered from serious injuries in the alleged arson case, according to the police and rescuers. People were later seen being carried out of the scene covered in blankets.

According to local police, a 41-year-old man, identified by his driver's license, admitted on his way to hospital that he spread a flammable liquid, possibly gasoline, around the building before setting it on fire.

The suspect, also being treated in hospital for injuries sustained in the fire, has been taken into custody, investigators said.

According to police accounts, witnesses at the scene said the suspect was yelling "Die" as he started the fire.

Some witnesses saw the man spray the liquid and use a lighter. A female witness living in the neighborhood said the suspect seemed to be shouting in a voice filled with resentment and anger, according to local media.

When the fire started, a total of about 70 people were working in the studio. Many bodies were recovered from the first and second floors of the studio.

According to local media, neighboring households said they heard what sounded like a series of loud explosions and saw thick black smoke billow from the studio, which is famous for producing popular TV animation series and artifacts.

More than 30 fire engines had to be deployed to the scene to deal with the inferno and as of 12:30 p.m. local time firefighters were still battling to control the blaze.

They managed to contain the fire around 3:20 p.m. local time, about five hours after it started.

The Fire and Disaster Management Agency dispatched staff to the scene to investigate the structure of the building and the reason of such a large death toll and big number of people injured.

Local fire authorities and other officials are still trying to confirm the details and whereabouts of some people thought to be in the building and still remain unaccounted for.

A number of knives and knife-like objects were also found at the scene, although investigators have yet to determine if these belong to the suspect.

Kyoto Animation runs studios in Kyoto and nearby Uji, where the company is headquartered. Founded in 1981, the company is well-known for its animations released in the 2000s that were popular with younger generations, and also produces related animation artifacts and runs training programs for animators.

The arson attack sent shock waves among Japanese anime fans, many of whom expressed sympathy and prayers online towards the company known as "KyoAni."

"My thoughts and love are with everyone at Kyoto Animation right now, I can't believe what they'd be going through," said Twitter user @DoctorDazza.

"I hope the damage will be as little as possible," said a Japanese fan living in Tokyo.