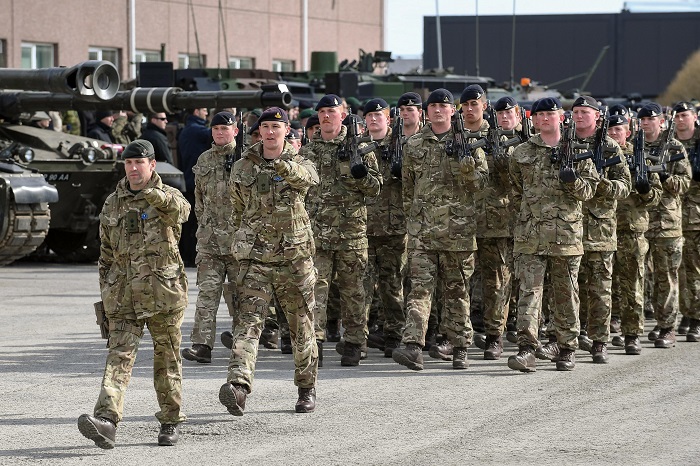 British soldiers march in parade at the ceremony to mark the beginning of services of the NATO battalion battle group at the Tapa Army Base in northern Estonia, on April 20, 2017. File Photo: Xinhua.

Sergeant Gavin Hillier, 35, was shot on Thursday during a night-time training exercise, the Times newspaper reported.

Hillier, from Pontypool, served in the regiment's motor transport platoon and was due to go Iraq this summer, the Evening Standard newspaper said, adding that in the past, he had served in Iraq and Afghanistan.

He was killed at the gunnery ranges at the Castlemartin training area in the Pembrokeshire coast national park.

An army spokesperson said, "The circumstances surrounding this death are being investigated and it would be inappropriate to comment any further."

Previous incidents at the Castlemartin ranges have claimed the lives of soldiers.

In 2017, Corporals Matthew Hatfield and Darren Neilson of the Royal Tank Regiment died from injuries they suffered after their tank exploded during a training exercise on a firing range.

A 21-year-old soldier, Michael "Mike" Maguire, died at Castlemartin in 2012 after being shot in the head while relaxing at a safe location just outside the training range.

A 2013 inquest into his death heard he was hit in the temple by a single machine gun bullet fired by a fellow soldier during a training exercise.

The inquest jury ruled Maguire, who was a member of the 1st Battalion, The Royal Irish Regiment, had been unlawfully killed.