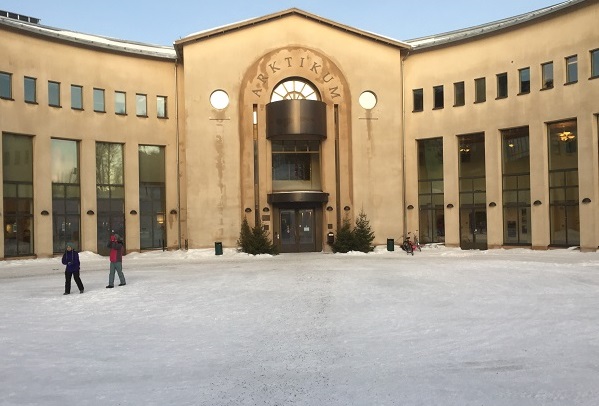 The Arctic Centre, a multidisciplinary research institute of the University of Lapland situated in the Arktikum building. DF File Photo.

Rovaniemi, the heart of Lapland, which hosted the 11th Arctic Council Ministerial meeting in May 6–7, is also playing a pioneering role in Arctic innovations and studies.

The Arctic Centre, a multidisciplinary research institute of the University of Lapland situated in the Arktikum building, plays the most significant role.

He said that the Arctic Centre conducts research in numerous disciplines including natural and social sciences.

“The multidisciplinary research at the centre focuses on the interaction between people and environment in social, political and environmental issues. The research is done through five groups: Arctic Anthropology, Northern Political Economy, Arctic Governance, Global Change and the Northern Institute for Environmental and Minority Law,” Koivurova said.

The Arctic Centre is internationally minded, with 13 nationalities represented on the centre’s staff and numerous international partnerships integral to its goals.

The partnerships include cooperation with various governments, the Arctic Council and the Barents Euro-Arctic Council. There are many researchers working on projects in the field across a number of countries.

Climate change has become the main talking point across the world and the changes have been even more apparent in the Arctic. This fact is evident in much of the ongoing research at the Arctic Centre.

One such area of research is geoengineering and glacial engineering. The research explores the possibility of an artificial construction of glaciers to counteract the melting of ice sheets and rising sea levels.

Other studies research the effects of climate change on reindeer herding and changes in the plant life in Arctic regions.

It is not only the natural sciences that are represented. There is a large amount of research focusing on the many indigenous groups of the Arctic region as well as hot-button issues such as China’s role in the Arctic and immigration.

“The Arctic Centre will celebrate its 30th anniversary during the Rovaniemi Arctic Spirit Conference that will take place in Rovaniemi in November 12–13, 2019. The theme of the conference is climate change and future generations,” Kouvurova said.

The Arktikum House was constructed in 1992. It is instantly recognizable for its long glass corridor that faces north and welcomes those arriving at Rovaniemi by highway. The view from inside the corridor displays the banks of the Ounasjoki river. Exhibitions flank either side of the corridor with a library at the back. Unbeknownst to many of the museum’s visitors, numerous curving hallways full of offices and meeting rooms wind throughout the unseen background of the museum. It is here where the Arctic Centre is headquartered.

Finland hosted the 11th Arctic Council Ministerial Meeting in Rovaniemi on May 6-7. Minister-level representatives from the eight Arctic states reviewed and approved work completed under the two-year Finnish chairmanship to improve sustainable development and environmental protection in the Arctic.

The city of Rovaniemi is becoming popular as the arctic capital of Finland because of its Arctic location along with strong Arctic knowledge, innovations and studies in the University of Lapland.

In addition, the city is turning into more international day by day following the influx of an increased number of international tourists in recent times, which prompted the local authority to take development strategy to make the city as the Arctic capital of Finland.