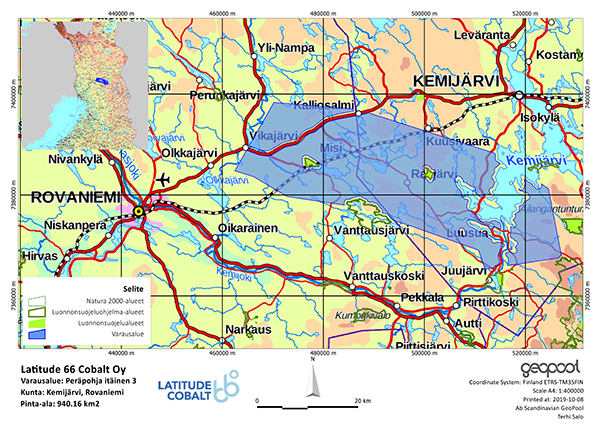 Latitude 66 Cobalt, an Australian-Finnish company, announced on Wednesday it had given Finnish authorities reservation notices in northeastern Finland.

Combined with a reservation it did in September, the company's reservations amount to 5,700 square kilometres in the area.

Finnish territory has the largest known reserves of cobalt in Europe. The demand for the metal is increasing due to its use in the batteries of electric cars. Under Finnish law a reservation can be made preceding ore searching and mining operations applications later.

Public attention to mining intensified in Finland on Wednesday with the announcement as parliament began debating on a civic initiative to widen landowner income from mining. Besides, the possible environmental damages caused by mining are widely concerned in the country.

Addressing parliament, Katri Kulmuni, the Minister of Economic Affairs of Finland, said that the current government will be introducing legislation to increase the collaterals mining companies must provide in advance for possible environmental damages.

Established in 2017, Latitude 66 Cobalt specializes in mining and mineral production. The current major producer of cobalt in Finland is the state-majority owned Terrafame mining company.