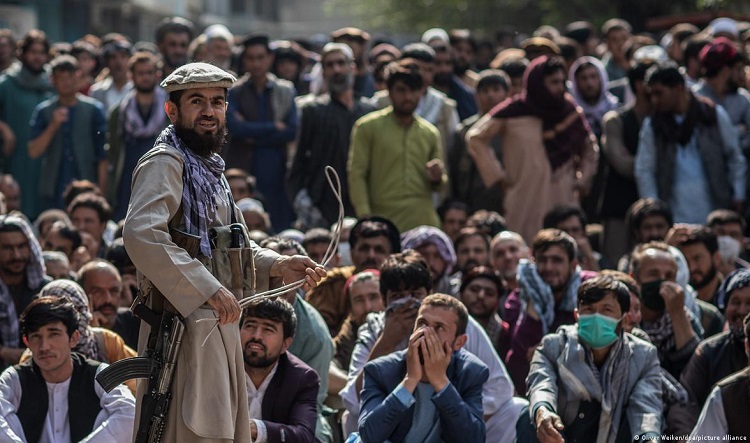 The Taliban-led Supreme Court in Afghanistan on Wednesday said fourteen people had been lashed at a football stadium in the east of the country, reported DW, quoting news agencies Reuters and AP.

It's the latest indication of the hardline militant group applying its strict interpretation of Sharia law.

"Fourteen people, including three women were lashed in the presence of scholars, authorities and people ... for different sins including adultery, robbery and other forms of corruption in a football stadium in Logar (province)," the Supreme Court said on Twitter.

According to a statement issued by the court, the Taliban's supreme spiritual leader Hibatullah Akhundzada had met with judges and said punishments should be carried out in line with Sharia law.

The governor's office of Logar province situated south of Kabul said that it had invited "honorable scholars, mujahideen, elders, tribal leaders and local people" to the town of Pul Alam's football stadium.

A government official who spoke to AP news agency on condition of anonymity, said that hundreds of people had attended the punishment and that those being punished received between 21 and 39 lashes each.

During the Taliban's rule from 1996-2001, lashings, amputations and death by stoning took place in public.

The actions of the militant group have been closely watched by the international community since seizing power in August 2021, in particular its human rights track record and stance on women's rights.

Women were deprived of getting a secondary school education when the Taliban backtracked on a commitment to open all girls' high schools in March.

Earlier this month Afghanistan's "morality police" ordered that all amusement parks in the country must now refuse entry to women, in the latest curtailment of freedom for women.

To date no country in the world has formally recognized the Taliban government.