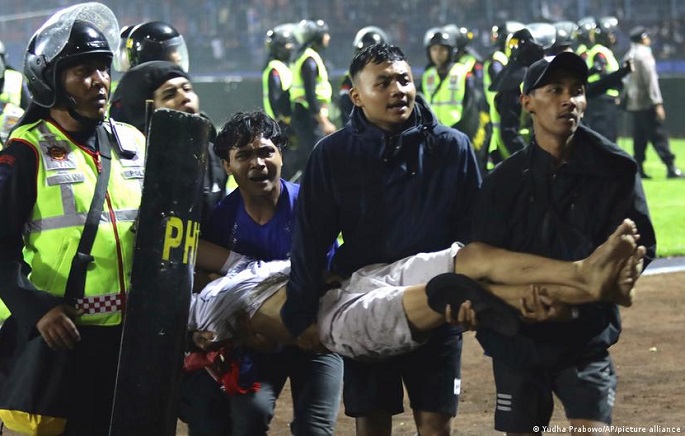 The Indonesian topflight fixture between Arema Malang and Persebaya Surabaya ended in chaos and tragedy on Saturday night. Indiscriminate police used tear gas in response to a pitch invasion which resulted in mass panic, stampedes, crushes and a provisional 125 fatalities (as of Sunday local time).

The current death toll makes it the most-deadly stadium tragedy in Indonesian football, and the third-most deadly such event in the sport anywhere in the world, narrowly following the Accra Sport Stadium disaster in Ghana in 2001 (126 deaths). Only the Estadio Nacional disaster in Lima, Peru, in 1964 (328 deaths) resulted in a greater loss of life.

Indonesia's Liga 1 has been temporarily suspended and home club Arema have been banned from hosting games for the rest of the season, while the Indonesian football association (PSSI) launches an investigation.

For those familiar with Indonesian football, fan culture and stadium policing, however, the tragedy at the Kanjuruhan Stadium in East Java has sadly come as no surprise.

"Terrible organization, terrible facilities, terrible policing and a culture of violence within certain sections of the fan culture — it was a disaster waiting to happen," says James Montague, a British expert on global fan culture who spent time traveling with Indonesian football fans while researching his 2020 book "1312: Among the Ultras."

Andrin Brändle, a Swiss author who spent a summer accompanying Indonesian side PSS Sleman for his book "A Summer with Sleman," agrees, writing for Swiss broadcaster SRF that "sub-optimal infrastructure," a "lack of coordination between security forces" and an "unbelievable dynamic on the terraces" were responsible.

Indonesia boasts one of the most vibrant and intense fan cultures in Southeast Asia, with matches well-attended and competitions featuring heated rivalries and derbies on and off the pitch. But violence isn't uncommon.

In terms of vitriol, the East Java derby between Arema Malang and Persebaya Surabaya is second only to meetings between Persib Bandung and Persija Jakarta — known as Indonesia's El Clasico — which was due to take place on Sunday before a late winner for Persebaya away at Arema (3-2) resulted in a pitch invasion.

"This isn't unusual, it happens quite frequently," Montague tells DW. "You frequently see coaches being attacked by fans for poor results."

In the absence of away supporters, who are generally banned from attending the biggest derbies, Arema fans initially encroached on to the pitch to speak to their players, before the situation escalated with the arrival of riot police.

"An incredible fan culture exists in Indonesia which has a lot in common with the early days English casual culture and the glory days of the Italian ultra-movement, with masses of young people, heavily involved in football culture, attending matches in huge numbers and producing elaborate choreographies," explains Montague.

"Supporting football clubs is a way of life which has been adopted wholesale in Indonesia. But over the years, it's also become one of the most violent places to watch football, with over 80 deaths in football stadiums over the past couple of decades."

Brändle adds that a "lack of modern surveillance infrastructure" and "poorly coordinated authorities" result in few violent football fans ever being brought to justice.

According to Montague, however, violence in Indonesia isn't just limited to football supporters, but extends to the police, who he accuses of an "idiotic response."

"The police are not equipped or skilled in dealing with crowds in any way, so they resort to brutal violence and archaic crowd control, as we saw here," he says.

Indeed, video footage from the Kanjuruhan Stadium shows police officers, visible through the clouds of tear gas, lashing out indiscriminately with batons, while one officer in particular can be seen aiming kicks into the backs of at least four people as they leave the pitch.

"Obviously, the fans got onto the pitch but it was a containable situation, until the police poured petrol on the fire by firing tear gas in quantities that I've never seen before, quantities which sting, suffocate and create mass panic."

"Anyone who knows anything about football crowd control knows that if you fire tear gas into confined space, as it looks like they've done, it will lead to deaths."

Montague and Brändle concur that both the police approach and Indonesians' relationship with the police can be traced back to experiences under the Sukarno and Suharto dictatorships of the second half of the 20th century.

"Trust in the state is low and anti-authoritarian opinions are widespread," writes Brändle for SRF.

Finally, the propensity of both fans and police to resort to violence was compounded by the fact that it all took place in a stadium which, like many in Indonesia, are not fit for purpose.

Despite having an official capacity of 38,000, the Indonesian security minister has claimed that at least 42,000 people were inside the Kanjuruhan Stadium.

"Uncoordinated entry procedures and a booming black-market lead to unclear situations," writes Brändle. "And in the case of the Kanjuruhan Stadium, many evacuation routes are blocked by vehicles because the stadium is located in the small town of Kepanjen, leading most fans to travel [almost 20 kilometers (12 miles)] from nearby Malang by car."

Montague recalls arriving at games in Indonesia where thousands of fans are funneled through narrow gateways, resulting in crushes among "decrepit facilities" at "old stadiums."

Montague concludes that, while violence and even deaths in Indonesian football are not uncommon, the events at the Kanjuruhan Stadium on Saturday night represented "a complete breakdown which was bound to happen sooner or later."