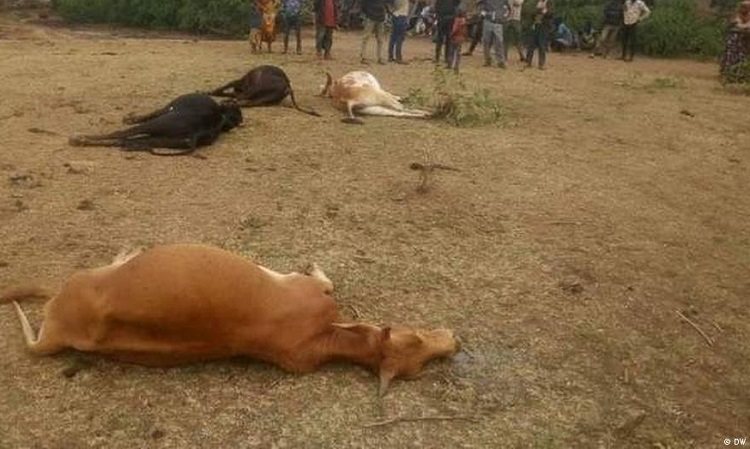 Animals have perished in drought-stricken parts of Ethiopia. Photo: DW.

Millions of people require assistance in parts of southern and northern Ethiopia amid the worst drought in 40 years.

Low rainfall combined with high temperatures has resulted in harvest failures and widespread animal deaths in the regions. People have been unable to cope with such conditions over the past four years.

A lack of clean water has increased the risk of disease in the drought affected areas. The Ethiopian Human Rights Commission is calling for more assistance and attention to those who are vulnerable.

According to a report by the Commission, thousands of people have been displaced or are living in precarious conditions in regions such as Oromia, and livestock have died by the thousands.

The Ethiopian National Meteorology Agency has meanwhile warned that the heavy rains in some areas could cause widespread disasters including landslides.

Earlier this month, Ethiopia saw a record 100 millimeters of rainfall.

The heavy rains triggered flooding in Ethiopia's capital, Addis Ababa, in the Oromia region, the Amhara region and other parts of the country.

Chali Debele, the director of the Meteorological Forecast and Early Warning Directorate at the National Meteorology Agency, told DW about the cause.

"The country's rainfall events are linked to the effects of climate change elsewhere because they occurred over a few days in the northern and southern parts of the country, accounting for nearly 40% of the country's annual rainfall," she said.

Debele believes that more rain, regardless of how much, will only deplete fertile land further in the southern Oromiya and Amhara regions.

More than 11 people died as a result of the heavy rain in Addis Ababa. Nine people were killed in a flood-related accidents, and police are investigating two more deaths.

Some of the city's residents believe the number of flood victims could be higher. Damage to life and property is said to be severe in some parts of the city where roads have had to be closed as fire fighters work to minimize the damage.

Eyob W. Gabriel, an 18-year-old, died while trying to save others in Addis Ababa. His three children are now homeless.

Solomon, a city resident, said rains that are hard to predict create many problems. "The city has no proper sewage system and every time when it rains, the road gets blocked, the traffic piles up and the elecricity also cuts off," he told DW.

Disaster management authorities in places such as Addis have strongly advised the public to exercise caution. City officials say the government has been working with the mayor's office since last year to lessen the impact of heavy annual rain.

Some residents complain that the government is not doing enough to prevent the problems the rains cause.

"There doesn't seem to be any systematic approach across the whole country, especially the city when it comes to dealing with flooding," one resident said. "I urge the authorities to invest and work on the city water system. If not, we risk everything".