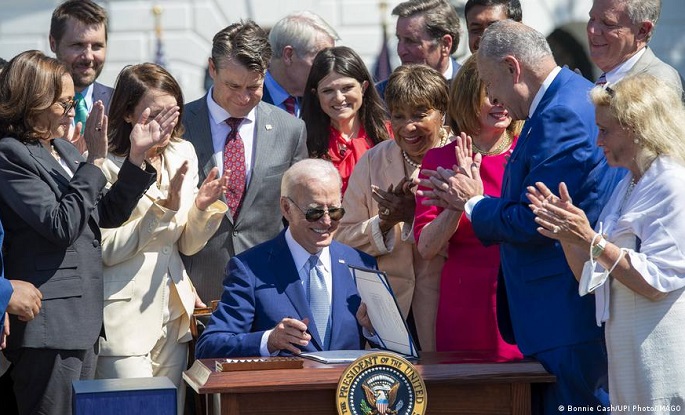 The US will invest around $52.7 billion (€51.6 billion) in microchip production under the $280 billion Chips and Science Act. The bipartisan measure is aimed to ensure the US can keep pace with China as the two countries vie for dominance in the high-tech sector, reported DW, quoting news agencies Reuters, AFP and dpa.

"The future of the chip industry is going to be made in America," US President Joe Biden said while signing the bill into law on Tuesday.

The move comes as the world faces a prolonged shortage of semiconductors, materials crucial for producing microchips. The terms "semiconductor" and "microchip" are often used interchangeably.

US at 'inflection point in history'

While microchip funding is the centerpiece of the new bill, the legislation will also increase funding to a myriad of other areas, including ocean research, space exploration, nuclear energy, and quantum computing. It also aims to combat issues such as sexual harassment in science and ease access to jobs in science, technology, engineering and mathematics in rural communities.

"The Chips and Science Act is going to inspire a whole new generation of Americans to answer that question: What next?" Biden said during the White House ceremony, which was also attended by industry leaders and union officials.

"Decades from now, people will look back at this week and all we passed and all we moved on, that we met the moment at this inflection point in history."

The US Senate passed the funding for the bill over a year ago, but the wrangling over different versions of the bipartisan initiative meant that lawmakers only voted on the final version of the measure late last month.

In June 2021, Beijing slammed the US as "paranoid" and said Washington should not treat China as an "imaginary enemy." This was echoed by China's US Embassy last month, with Chinese diplomats saying the bill was "entrenched in the Cold-War and zero-sum game mentality."

On Tuesday, Biden noted that semiconductors are also necessary for weapons such as Javelin anti-tank missiles.

"It's no wonder the Chinese Communist Party actively lobbied US business against this bill," Biden said.