World must halve emissions by 2030: IPCC 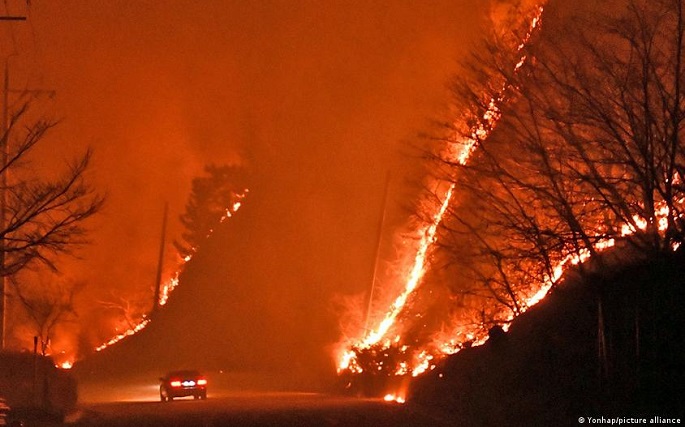 Wildfire intensity is set to get much worse unless heat-trappings emissions are cut very soon. Photo Source: DW.

In the final part of the Intergovernmental Panel on Climate Change's (IPCC) sixth assessment on the state of global warming — themed on climate mitigation — the message is clear: The window for keeping heating below 1.5 degrees Celsius, and limiting catastrophic climate impacts, including worsening wildfires and flooding, has become very small, reported DW.

Following on from earlier UN reports on the science of climate change, and impacts and adaptation, the latest edition details the means to fix the problem. Paramount is a more ambitious phase-out of fossil fuels responsible for two-thirds of planet-warming carbon emissions since 1850; and the concurrent electrification of a global energy system powered largely by wind and the sun — the cost of renewables has declined up to 85% since 2010, notes the report.

The IPCC offers mitigation pathways to achieve "immediate and deep emissions reductions across all sectors," meaning around a 50% cut in greenhouse gas (GHG) emissions (relative to 2019 levels) by the end of this decade.

Campaigners had hoped the report would decline to promote carbon dioxide removal (CDR) technologies to reverse a carbon budget blow-out. However, carbon capture and storage (CCS), though unproven at scale, remains a fall-back option.

Protecting forests and biodiversity — which provide vital CO2 sinks — and improved building efficiency and transport electrification are essential parts of the mitigation pathways outlined in the 3000-odd page report.

An increase in public sector climate finance and an equitable and just transition for poorer countries with low per capita emissions will also be vital for meeting global mitigation goals.

Governments must phase out fossil fuels

No nation is currently on track to meet the Paris targets of keeping warming well below 2 degrees Celsius — and ideally below 1.5C.

The targets in the current National Climate Plans (NDCs) are equivalent to about 3.2C of warming this century. Extreme weather and ice melt across the Arctic are already being felt with only around 1.2C of heating since pre-industrial times.

Warming cannot be limited to 1.5C unless emissions peak by 2025, said the report. Global net zero CO2 emissions also need to be reached by the early 2050s.

The latest IPCC report aims to give governments the justification to set necessary emission reduction targets. Thirty-two years since the IPCC's first climate report, emissions have risen by 54%, according to the climate body.

"This latest IPCC report puts policymakers on notice, yet again, that the current global trajectory of heat-trapping emissions is alarmingly off-track," said Rachel Cleetus, policy director and lead economist for the Climate and Energy Program at the Washington, D.C.-based Union of Concerned Scientists — and an official observer of the climate mitigation report.

"Their continued inaction is directly responsible for the climate crisis already here, and it has also placed the goals of the Paris Agreement at grave risk," she added.

100% wind and solar energy combined with biodiversity restoration and "demand-side" measures included in the report — such as low-carbon vegetarian diets and reduced consumption in the global north — need to form part of government mitigation policy, said Schneider.

Negative emissions and fears of an 'overshoot'

Some of the mitigation pathways included in the report factor in "negative emission" technologies such as bioenergy with carbon capture and storage (BECCS) — by which trees feed power plants whose emissions will be captured at a future date when the technology is available.

The practice is regarded as carbon negative by the IPCC, and the EU, because the trees that feed the bioenergy plants are deemed sustainable — even if a large amount of forest and agricultural land will be lost to support the necessary tree plantations.

Moreover, carbon capture technology remains at the pilot stage and is not "a real world solution," said Schneider.

"The [report's] central climate mitigation strategy — phasing out all fossil fuels, starting immediately — is often diluted by references to technofixes that are meant to keep the fossil fuel industry alive," she added.

The implication is that temperatures will be lower again once CDR technologies come on board. But it could already be too late if irreversible "tipping points" have been triggered, Schneider explained, including the thawing of permafrost regions that are massive carbon sinks — causing additional emissions that would greatly accelerate the climate crisis.

There is a concern that CDR will be a means to postpone immediate emission cuts.

"To avoid worst case scenarios and unmanageable impacts, the promise of negative emissions at some future point in time must not be used as an excuse to delay action on efficiency and the deployment of renewables now," said Taylor Dimsdale, director of risk and resilience at global climate think tank, E3G.

"It's very uncertain if we can even return to 1.5," said Schneider of the overshoot scenarios, noting that "feedbacks and tipping points could even happen before 1.5 degrees is reached."

The 'co-benefits' of mitigation

For Alexandre Köberle, a research fellow at the Grantham Institute, Imperial College London, and a lead author of the latest IPCC publication, the calculated cost of mitigation in the report needed to account for "the impacts that we would avoid if we tackle climate change."

Mitigation costs in the report are again measured in terms of global Gross Domestic Product (GDP) — a measurement that IPCC Working Group III Co-Chair Priyadarshi Shukla concedes does not take into account "the economic benefits of reduced adaptation costs or avoided climate impacts."

Nonetheless, GDP would be "just a few percentage points lower in 2050 if we take the actions necessary to limit warming to 2°C," according to Shukla.

Yet Köberle says GDP is an "awful metric" that will not give necessary clarity for politicians wanting to convince the public of the benefits of a full energy transition.

The "co-benefits" of mitigation policies such as reduced air pollution and improved respiratory health are also not counted, he notes; nor is energy sovereignty and reduced dependence on external energy suppliers — especially at a time when Europe is trying to reduce its dependence on Russian gas and oil.

The IPCC will now finalize its mammoth sixth assessment, the first since 2014, for release in September on the eve of COP27 — when governments are expected to update their NDCs and commit to a more ambitious fossil fuel phase-out.