8 killed in car bombing in Mogadishu 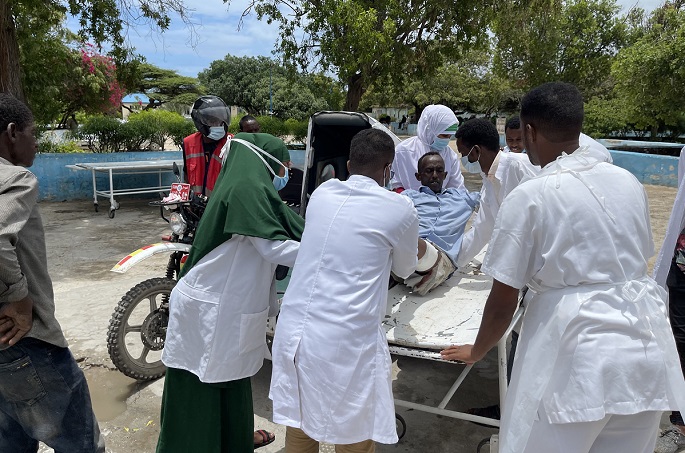 Nurses of the Medina hospital take care of a wounded after a car bomb blast in Mogadishu, Somalia, Sept. 25, 2021. File Photo: Xinhua.

At least eight people were confirmed dead and 17 others wounded in a suicide car bombing in in Somali capital Mogadishu early Thursday, the police said.

A police officer at the scene told Xinhua that the death toll could rise after a suicide bomber targeted a convoy escorting foreign security forces near a local school in the Hodan district in Mogadishu.

"At least eight were killed and 17 others injured in the blast. The blast occurred in front of Muasir school and children are among the casualties," the police officer, who declined to be named, said on the phone.

The police said the target was a convoy belonging to a security firm that guards the United Nations personnel who were reportedly traveling from Gordon training camp to Halane base camp.

Al-Shabab militants have claimed responsibility for the latest attack in the restive city.

The Somali National Army backed by the African Union Mission in Somalia drove al-Shabab out of Mogadishu in 2011, but the terror group is still capable of conducting attacks, targeting government installations, hotels, restaurants and public places.