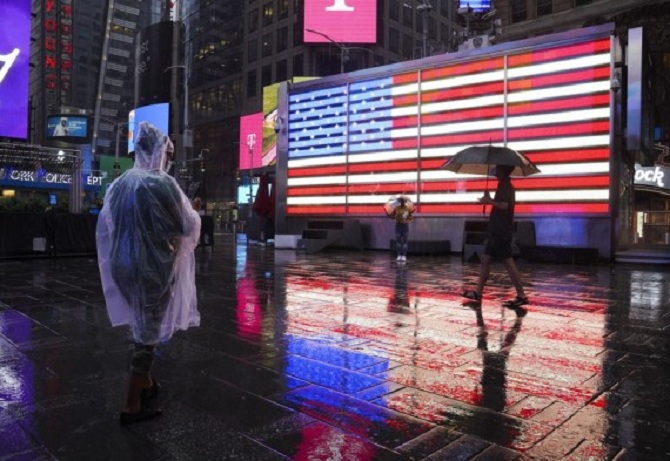 People are seen in the rain caused by tropical storm Henri, in Times Square in New York, the United States, Photo Xinhua/Wang Ying

Tropical Storm Henri made landfall at 12:15 p.m. Sunday near Westerly, Rhode Island, with winds of 60 mph, the National Hurricane Center (NHC) said, as thousands of customers without power braced for the full effect of the storm, reported Xinhua.

Tropical storm warnings were extended from coastal Connecticut and Rhode Island to the luxurious oceanfront estates of the Hamptons on the eastern end of Long Island, New York, with over 100,000 power outages reported for customers up the northern East Coast as of 5:00 p.m., most in Rhode Island.
Meanwhile in New Jersey, at least 86 people were rescued from flooded vehicles related to the tropical storm Sunday afternoon, according to the Newark Department of Public Safety.

It appeared that most major airports in the path of the storm remained open on Sunday, but hundreds of flights had been canceled. FlightAware, a flight-tracking website, reported that more than 1,000 flights in or out of or within the United States had been canceled.

Although the storm had been downgraded from a hurricane, many parts of New York, Connecticut, Rhode Island and southern Massachusetts were experiencing heavy rain, which could cause major flooding and wind gusts of up to 75 mph, said NBC on Sunday.

An advisory from the NHC at 5:00 p.m. said the storm had weakened slightly while moving across Connecticut. Henri was expected to stall over the New York-Connecticut border Sunday night before heading for southern Massachusetts on Monday. Heavy rain and flooding are expected across the region overnight.