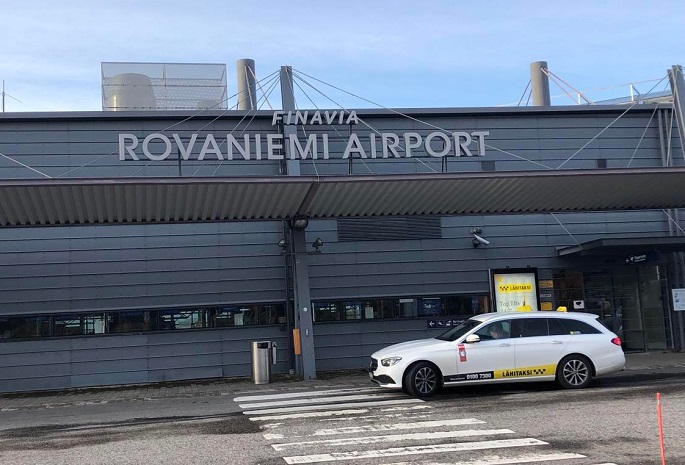 Travelling to and from Rovaniemi by air became more expensive as there is no public transport to travel between the Rovaniemi City and the Airport.

Absence of any public transport forced the travelers, particularly tourists to hire a taxi resulting a huge cost while the frequent local travellers try to find a ride from friends or relatives to avoid spending about 30 euros for the about nine kilometers journey.

In the past the travellers had the opportunity to travel between any place in the city and the airport by a shared taxi service called Airport Taxi at a cost of 10 euros per person and between the city centre and the airport at a cost of seven euros per person but the service is also not available at this moment resulting frustration among the travellers.

“The price for my air ticket from Rovaniemi to Helsinki is 65 euros but the cost to reach the airport by taxi is about 30 euros as a result the cost for the total journey increases significantly,” a local traveller, who travels between Rovaniemi and Helsinki by air frequently told Daily Finland.

Another Japanese tourist expressed her disappointment over absence of a public transport terming the situation unfortunate.

“Rovaniemi, the home town of Santa Claus is a favourite destination to tourists and there should be smooth travelling system at a reasonable price,” she told Daily Finland.

Terming the presence of public transport to and from airport as vital for tourism, Managing Director of Visit Rovaniemi Sanna Kärkkäinen said that they got negative feedback from travellers concerning airport connections.

“We think that public transportation from and to airport is vital for Rovaniemi tourism. We have greater network than ever of routes that connect Rovaniemi globally and there is going to be growing demand for transportations,” Kärkkäinen told Daily Finland.

“We get lots of inquiries and quite negative feedback concerning the airport connections from travellers expecting that there would be more sustainable choices offered for the great amount of travellers that Rovaniemi is expecting. We hope that the public bus connection would be operated several times a day for the season,” she added.

Kärkkäinen said that many times travellers also expect available taxis without booking in advance. This is something the service providers need to be more precise in communicating – whether the taxi needs to be pre-ordered or not.

“The travellers might be surprised when they find no taxis and have no idea how to order it at the airport,” said the Visit Rovaniemi MD.

Visit Rovaniemi source said that the AirportBus in Rovaniemi announced to resume operation of Airport Express service from beginning of November but unfortunately the company did not announce the exact timetable for the upcoming winter season yet.

Rovaniemi City Engineer Jukka Ylinampa said that the city does not organize public transport to the airport for the time being.

“According to our previous investigations, there has not been so much demand for public transport to the airport that it would be appropriate to organize it with public funds,” Ylinampa told Daily Finland.

He said that private operators organised traffic in this route earlier seasons and also would organise for the coming season.

“At the moment city of Rovaniemi is valuating public transport route from city center to airport for the winter season 2022/2023. Organizing traffic is expensive. About half of the costs of organizing local transport is covered by ticket revenues, the other half is covered by tax funds,” the City Engineer added.