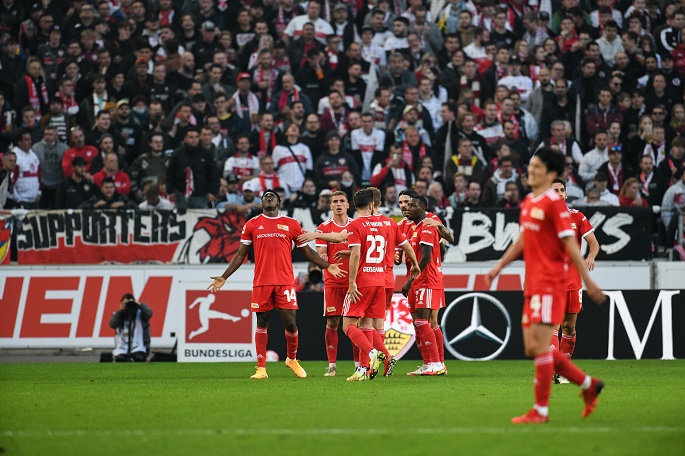 Anthony Modeste scored a second-half brace as Cologne battled from two down for a 2-2 Bundesliga derby draw against Bayer Leverkusen on Sunday.

Fifth-placed Union are a point below Leverkusen, who are now five behind leaders Bayern, who beat Hoffenheim 4-0 on Saturday.

Promoted Bochum went above fitful Eintracht Frankfurt into 14th after a 2-0 home win in the weekend's final game, Danny Blum with the early goal and Sebastian Polter striking late.

Goncalo Paciencia had a weak penalty saved for the visitors and then went off injured in the first half.

Leverkusen seemed well on course in Cologne when Patrik Schick poked the opener into the bottom right corner off Moussa Diaby in the 15th minute. Robert Andrich then found Karim Bellarabi to net for 2-0 just two minutes later after Andrich's initial effort was blocked.

But Modeste halved the deficit in the 63rd at the far right post off captain Jonas Hector and then also headed the equalizer in the 82nd when he beat Odilon Kossounou to the ball for his 50th Cologne goal.

The draw will be more precious for eighth-placed Cologne, who showed character a week after crashing 5-0 at Hoffenheim.

"This is our living room and you can't just come here and win," Modeste told streaming portal DAZN. "Some people probably wrote us off but we managed to turn the game."

Leverkusen goalkeeper Lukas Hradecky said: "It feels like a defeat after blowing the lead. We had many chances and Cologne would have not come back at 3-0."

Jeremie Frimpong smashed against the crossbar for the visitors in the 25th but Leverkusen were also wasteful on the counter in the second half.

Teenage star Florian Wirtz was in Leverkusen's starting 11 but did not shine against his former club he left last year.

Union looked set for a fourth league win in a row thanks to hot-shot Taiwo Awoniyi sweeping into the bottom corner from just outside the box on 31 minutes.

It was the Nigeria striker's seventh of the Bundesliga season from just nine games.

Stuttgart, in 13th, then had Atakan Karazor sent off for a second booking on 57 minutes but levelled with almost the last kick of the game through Wahid Faghir's first Bundesliga goal.

"Stuttgart can be very happy with themselves because we should have been out of sight."

Third-placed Freiburg's 2-0 win at Wolfsburg on Saturday marked the end for Wolves coach Mark van Bommel, who was dismissed on Sunday after just five months following a winless run of eight games in all competitions after winning his first four Bundesliga games.

"There were more factors that separated us than united us," sporting director Joerg Schmadtke said in a statement.