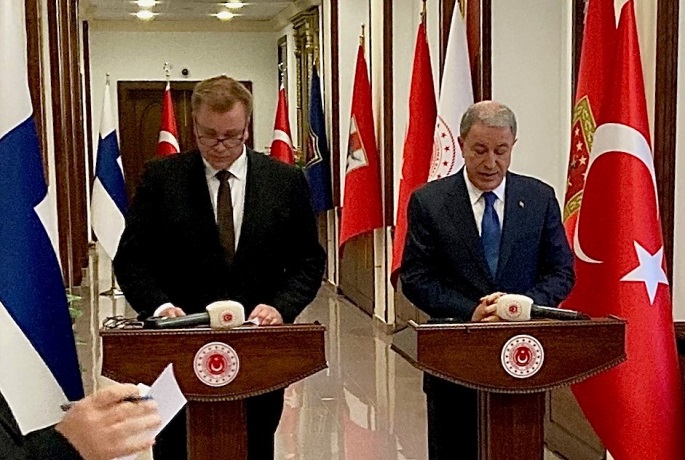 Minister of Defence Antti Kaikkonen on Thursday met with his Turkish counterpart Hulusi Akar in Ankara. Photo: Ministry of Defence.

Minister of Defence Antti Kaikkonen on Thursday met with his Turkish counterpart Hulusi Akar in Ankara and hoped to start cooperating with Turkey as NATO Allies as soon as possible, said the Ministry of Defence.

“Finland’s and Türkiye’s bilateral defence relations are in good standing. I hope we can start cooperating as NATO Allies as soon as possible,” the Ministry said in a twitter post, quoting Kaikkonen as saying.

Kaikkonen during his two-day visit to Turkey on Wednesday and Thursday discussed Finland's NATO membership process, general security situation and defence cooperation between the two countries.

Turkey urged Finland to lift the embargo on its defense industries to pave the way for Finland's NATO membership, reported news agency Xinhua.

"We expect all our allies, especially Finland, to support and contribute to Türkiye's fight against terrorism and the modernization efforts of the Turkish armed forces," Turkish Defense Minister Hulusi Akar said after the meeting with Kaikkonen.

In what he called a "productive" and "constructive" meeting with Kaikkonen, Akar said the meeting focused on two issues in the Turkish-Finnish relations: the fight against terrorism and removal of arms export restrictions.

This was the first visit to Turkey by a Finnish defense minister in 17 years, he noted.

Kaikkonen said his country will continue the process of lifting the arms embargo on Turkey given that the two countries would be "allied countries within NATO in the future."

"As it is clearly stated in the Trilateral Agreement, there is no international arms embargo," said Kaikkonen, referring to a memorandum of understanding signed by Finland, Sweden and Turkey on June 28 on the two Nordic countries' accession to NATO, the Xinhua report added.

On November 29, Foreign Ministers of Finland, Sweden and Turkey on Tuesday met in Bucharest and discussed the progress of Turkey´s position regarding Finland, Sweden´s NATO membership ratifications.

Earlier, the second meeting of the Permanent Joint Mechanism between Finland, Sweden and Turkey was held on November, 25 in Stockholm.

Turkey is demanding concrete Finnish and Swedish actions to address Turkish security concerns over extraditing hostile groups members before it unblocks their accession into NATO.