Protests held in Helsinki against violence in Gaza 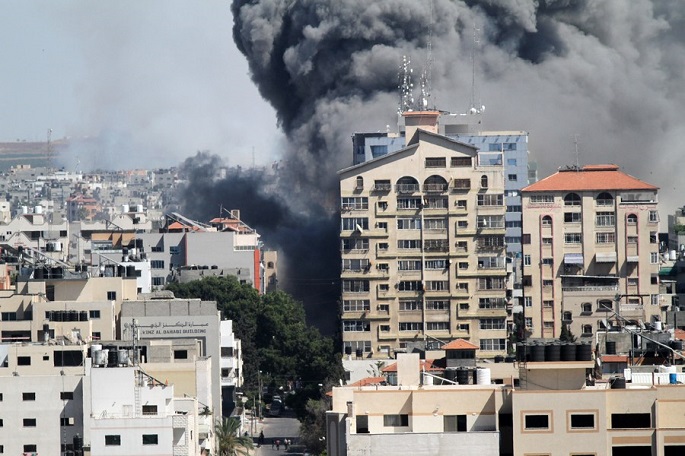 Black smoke billows into the sky following an Israeli airstrike on Jala Tower, which housed some foreign media outlets and residential apartments, in Gaza City, on May 15, 2021. Photo: Xinhua by Rizek Abdeljawad.

Separate demonstrations were held in Helsinki on Sunday protesting against the ongoing conflicts between Israel and Palestinians.

About 400 people staged demonstration expressing solidarity with of Palestinian people in front of Helsinki's Lutheran Cathedral at about 4:00 pm, local media reported.

Another demonstration of about 150 people organised by the Finnish-Syria Friendship Society held in the Helsinki city centre in the afternoon protesting the Israeli attacks on the Palestinians.

Police arrested one person from the spot at the beginning of the rally. The demonstration, however, went peacefully and the protesters maintained social distance as per the directives issued in the backdrop of coronavirus outbreak.

However, a small group of 50 to 100 people staged a demonstration at Paasikivenaukio area in sport of Israel.

Helsinki Police in a twitter post warned about possible disruption of traffic movement due to the demonstration related to the situation in Israel and procession started from Senate Square and ended at Simonkatu via Aleksanterinkatu and Mannerheimintie.

According to the Palestinian Ministry of Health in Gaza, the number of Palestinians killed in the Gaza Strip since Monday reached 188, including 55 children and 33 women, in addition to more than 1,000 injuries, reported Xinhua.

Over the past six days, the armed conflict between Israel and the Hamas-led militant groups has kept escalating, marking the fiercest fighting between the two sides since 2014.