State of emergency to be relaxed partially from 1 June 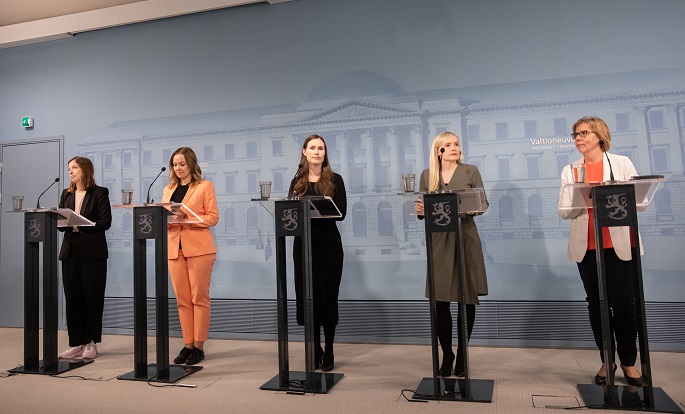 Leaders of the five-party alliance government on Monday spoke at a press conference about government measures regarding the state of emergency following the coronavirus situation of the country. Photo Finnish government by Lauri Heikkinen.

The government has decided to relax the state of emergency partially from 1st June.

Prime Minister Sanna Marin made the announcement at a press conference on Monday evening after holding informal negotiation meetings to discuss an action plan to manage the coronavirus crisis on Sunday and Monday, said an official press release.

The government will adopt a related resolution at its plenary session where it will set out in detail the decisions taken in particular.

The decisions are based on the first phase of the report put together by Permanent Secretary Hetemäki’s working group on coronavirus exit and reconstruction strategy.

As of 14 May 2020, the statutory restrictions on cross-border traffic across the Schengen internal borders will be lifted in phases by allowing employment or commission-related commuting and other essential traffic.

For the time being, recreational travel abroad is not recommended, and travel advice will be issued by the Ministry for Foreign Affairs accordingly. The Ministry of the Interior will draft more specific guidelines on the gradual opening of border traffic.

The gradual opening of restaurants will begin on 1 June, provided that this is supported by the effects of lifting the current restrictions and by the subsequent general epidemiological assessment.

Outdoor recreational facilities will be opened as of 14 May, subject to the restrictions on gatherings.

Sports competitions and series can be resumed with special arrangements from 1 June.

Borrowings of books and other materials from libraries will be permitted immediately.

The following public indoor premises will be opened in a gradual and controlled manner as of 1 June: national and municipal museums, theatres, the National Opera, cultural venues, libraries, mobile libraries, services for customers and researchers at the National Archives, hobby and leisure centres, swimming pools and other sports facilities, youth centres, clubs, meeting rooms of organisations, day-care services for the elderly, rehabilitative work facilities and workshops.

In line with the government’s decision, large public events with more than 500 people will remain prohibited until 31 July.

Based on an epidemiological assessment, it will be possible to ease the restrictions on the number of persons from the current 10 to a maximum of 50 from 1 June until further notice.

The situation will be reviewed again by the end of June.

The 50-person limit applies not only to public gatherings but also to events organised by private and third-sector operators, to cultural, recreational, exercise and sports, and religious events.

Restrictions concerning general upper secondary schools, vocational schools, higher education institutions and liberal education will remain in force until 13 May. From then on, beginning from 14 May, the use of the premises of the above-mentioned educational institutions for teaching will be controlled through measures in line with the Communicable Diseases Act.

Contact teaching can be resumed in a controlled and gradual manner. However, the government recommends that universities, universities of applied sciences, upper secondary schools, vocational schools, liberal adult education and basic adult education institutes should continue with distance teaching until the end of the current semester.

Restrictions on organisation of basic education in the arts will remain in force until 13 May, after which their premises will be opened correspondingly for contact teaching.

Anyone aged over 70 should continue to avoid physical contacts as far as possible. The government emphasises that those who belong to the risk groups should use own discretion in observing the guidelines.

The restrictions concerning visits to healthcare and social welfare units will remain in force until further notice and the matter will be next reviewed by the end of June. For example, care units are looking for new practices to enable safe social contacts.

The government on March 16 declared a state of emergency in the country following the outbreak of coronavirus.