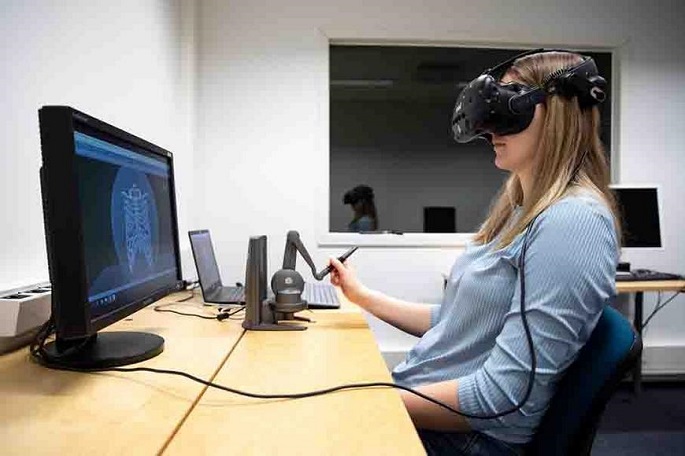 A researcher studies an image of a patient using a virtual headset. She receives haptic feedback via a hand-held controller. Photo: University of Tampere by Hilma Toivonen.

Using this new method, a doctor can use a VR headset to examine the patient's health problem, make a diagnosis and even plan operations.

The solution also includes haptics, the technology of transmitting information through touch. A special controller will enable the surgeon to experience the "touching" of the area that is being operated on, Tampere University said in a press release on Monday.

"In the future, this method can replace the more traditional two-dimensional computer-assisted surgical planning," said Jorma Järnstedt, a specialist in dentomaxillofacial radiology at Tampere University Hospital. "The method we tested has clear advantages for visualizing complex anatomical structures."

As the project draws to a close, the researchers will continue to collaborate with businesses and Aalto University in Espoo, Finland, on the development of explanatory artificial intelligence (AI), among other topics. The aim is to enable several doctors to come together in the same VR to jointly review a patient model as they are making decisions that require expertise from different medical specialties.

"This is important because medicine is increasingly moving towards telemedicine and remote diagnosing and consultation. It is predicted that more and more doctors' appointments will happen virtually in the future," said university researcher Pertti Huuskonen explained.