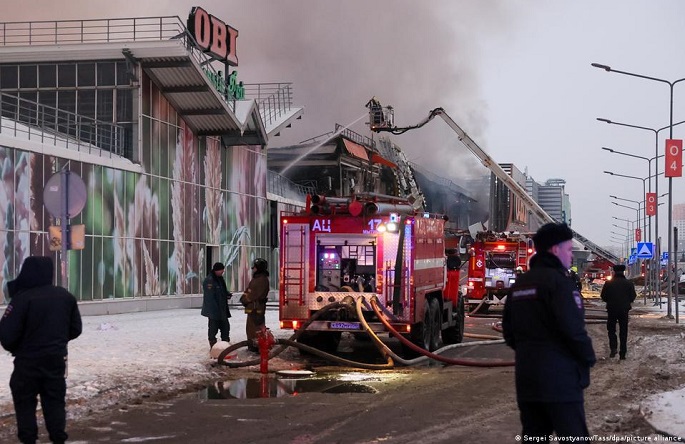 One of the largest shopping malls near the Russian capital was engulfed in flames on Friday with authorities saying they were looking into the possibility of an arson attack, reported DW, quoting news agencies AFP and Reuters.

The fire spread across an area of around 7,000 square meters (75,000 square feet) at the Mega shopping mall in the town of Khimki on the outskirts of Moscow and just seven kilometers (four miles) from the capital's Sheremetyevo Airport.

Videos shared on social media showed thick black smoke rising from a large blaze while others showed people running away through the parking lot.

Russian authorities reported that one person had died and that the conflagration had caused part of the structure to collapse, hampering the efforts of rescue workers.

"Due to the collapse of the roof, the fire spread instantly to a large area," the region's emergency services said on Telegram. More than 70 firefighters and 20 fire trucks were on site tackling the blaze.

News agencies had first cited emergency services saying that the incident was likely due to "arson," but state news agencies later said that failure to stick to safety regulations was the suspected cause.

The Mega mall had hosted numerous western chains before many of them pulled out of Russia following Moscow's invasion of Ukraine.